Vested interests, ignorance and fear are affecting the international expansion of Open Banking as other jurisdictions aim to create their own versions, according to Tony Craddock, director general of the Emerging Payments Association (EPA). 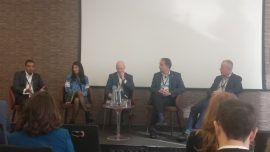 On a panel at the Open Banking Expo in London, Craddock says that even in interested geographies like Singapore, regulators are more inclined to create their own copy of Open Banking. “’Not invented here’ syndrome is affecting it,” he adds.

David Head, who leads Open Banking products for Mastercard, adds that things will always play out differently in different markets. “Some are heavily regulatory whereas others are letting the markets take the lead.”

Head says that he believes international schemes like Mastercard and Visa don’t have a “divine right” to define how initiatives like Open Banking should be adopted, but admits that it’s about “collaboration and ecosystems and bringing assets together to solve challenges.”

He argues that regulators can take a number of roles in the proliferation of Open Banking services. “They can be a stimulant to get things going, and can be very good at setting the boundaries, creating safety nets and helping the entire community come forward. Their job should be to set up the field and then let others play on it.”

Sujata Bhatia, senior vice president at American Express, argues that this can often be a big difference between the loft goals of international regulators and the consequences of their actions.

Read more: Innovation by regulation is a “flawed idea”

“Secure customer authentication (SCA) aimed to make payment secure and create trust but the implementation has been overly prescriptive or too vague and not taken into account the complexity of the payments landscape. We’ve had the delayed adoption because of the teething problems.”

Craddock stresses that international collaboration will be a boon for the industry.

“Yet the reality is that some regulators see their role as protective and there’s a high chance that the regulator in one market would say that it doesn’t want to adopt the same model as somewhere like the UK. People look at the UK as world leading in payments, but does that mean we can cut and paste our ideals elsewhere? It would be ideal, but is it likely? I don’t think so.”