French fintech start-up Virgil has raised €2.1 million in its first round of funding to help millennial first-time home buyers get a leg up on the property ladder.

The newly-funded Paris-based company offers future buyers a capital contribution – not a loan – in exchange for co-ownership of the property purchased. 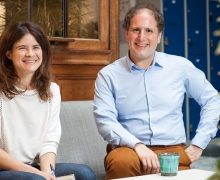 With the ability to provide up to €100 million per home, Virgil will make a 10% contribution for 15% of the apartment. The first-time homeowner can then later decide whether they want to sell their apartment, or buy Virgil’s share after ten years.

Virgil relies on an average contribution by the home buyer of between €40-50,000, and it will charge a fee of up to €2,000 once the transaction is signed.

The funding round was backed by French funds Alven Capital and Kima Ventures, as well as the seed fund investor for City Mapper, Zoopla and Transferwise, LocalGlobe, and a group of angel investors.

“Becoming a homeowner is the first step in building up one’s net worth,” Virgil’s founders Keyvan Nilforoushan and Saskia Fiszel tells Tech EU. “We launched Virgil to enable everyone to take this first step in the best possible way.”

The founders say the price per square meter in Paris has gone up 150% since 2000, but that disposable income hasn’t changed. This leads Virgil to dub the imbalance “the stone ceiling”.

Instead, the start-up wants to create a “fluid, digital purchasing process” where young home buyers don’t compromise because of financial constraints.

Founders Nilforoushan and Fiszel both come from years of experience at British luxury brand onefinestay, which became a €148 million acquisition by French multinational hospitality company Accor Group in 2016.

Initially offering the capital help to home buyers in Paris, Virgil has not commented on where it will be expanding to next. By 2021 it hopes to have landed 5,000 transactions, and plans to launch a fortnightly newsletter called Spoon educate people on financial wealth management.