Intelligent business payments platform Bill.com aims to raise $100 million in an initial public offering (IPO), according to a recent filing with the US Securities and Exchange Commission (SEC).

Underwriters listed for Bill.com’s IPO include Goldman Sachs, Bank of America (BofA) Securities, Jefferies and William Blair. Pricing terms have not yet been shared publicly. 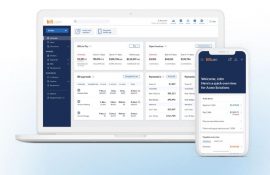 With $347.1 million already in the bank according to Crunchbase, the 2006-founded company has gathered investors as big as MasterCard, Silicon Valley Bank (SVB) and BofA.

Talking about how the procure-to-pay landscape is converging, Mercator Advisory Group’s commercial and enterprise payments director Steve Murphy says: “That’s led technology companies such as Bill.com to add virtual cards to automate accounts payable for small businesses through partnerships with Amex and Mastercard.”

Set up by PayCycle’s co-founder René Lacerte, Bill.com now has more than three million members and processes $60 billion in yearly payments, according to its announcement in April 2019 following its most recent funding round of $80 million.