At least three top UK banks have pulled their mobile banking apps from Google’s Play Store for Samsung S10 users following fears the fingerprint feature can be unlocked by anyone, not just the phone’s owner. 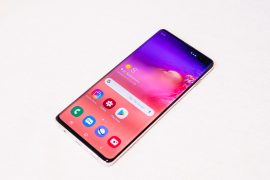 NatWest Bank, Nationwide, and Royal Bank of Scotland (RBS) are among the first to inform customers on Twitter that they have removed access to the app for these users, citing reports of “security concerns”.

So far customers with Natwest and Nationwide mobile banking apps already installed on their S10s have seen the fingerprint feature disabled within the app.

But it’s not just an issue for UK banks. Alipay, WeChat Pay and Bank of China have all withdrawn the fingerprint authentication feature from their apps for Samsung Galaxy S10, Note 10 and Tab S6 users, according to Technode.

This is bad news for Samsung, whose market share for handsets in China dropped to 1% at the beginning of this year from 20% in 2013. Counterpoint Data shows that since Q2 the electronics conglomerate now accounts for less than 1% of the total market share.

Hapoalim Bank, one of Israel’s largest banks, has also pulled fingerprint login support for the S10 and Note 10 according to customers who took to Reddit, and South Korea’s KaKao Bank has warned S10 users to disable fingerprint authentication on their apps.

Samsung released a statement telling customers: “If you’ve used a screen cover, such as silicone cover with a textured surface on the inside, the texture itself may be recognised as a fingerprint that can unlock your phone.” The firm says it “will soon issue a software patch” to S10 users.

The security concerns arose after a British woman bought a £2.70 gel screen protector on eBay. After registering her right thumbprint she found her unregistered left thumbprint could also unlock the phone. Her husband was also able to unlock it. The phone registered the gel case as a fingerprint in itself, rather than actually registering the users fingerprint pressed over it.

Read on: Worldline and Conduent to build new ticketing system for Paris transport with Samsung