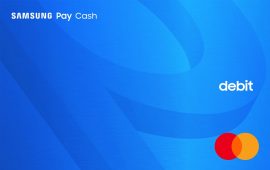 This follows Samsung’s introduction of a new international ‘Money Transfer’ feature in its Samsung Pay app with Finablr earlier this week. Samsung says these are its first steps to evolving Samsung Pay into “a platform that makes users’ financial lives more convenient”.

The South Korean conglomerate has designed a card which works anywhere Samsung Pay and Mastercard are accepted for contactless payments and magnetic stripe cards. Prepaid debit card provider Netspend is powering the product alongside Mastercard.

In its mission “to make lives easier” for its customers, Samsung says users have no need to worry about security, confirming the cash card is protected by mobile security solution Samsung Knox and Mastercard’s token services.

“We envision a future in which people can leave their cash and cards at home, take care of everyday financial matters easily, and earn rewards all along the way,” says Samsung America’s vice president and division head Sang W. Ahn.

Ahn thinks this virtual card will “empower people to be knowledgeable about where their money is going”, envisioning the payment process will feel more “fun” with it.

Samsung competitor Google launched a prepaid debit card alongside its Google Wallet back in 2013, but three years later it ditched the product, deciding the demand and need was insufficient.

Along with its new card, Samsung has also added a rewards touch which will it hopes drive users to use the payment channel. The transfer feature, currently just available for US customers, offers payment gateways to 47 countries using a pre-registered debit or credit card on the app.

All fees and exchange rates are included “upfront” to avoid post-transfer fees, and security heavily relies on Finablr’s foreign exchange (FX) company Travelex. The FX transfer service will be available in other markets in 2020, says Ahn.