A UK-based fintech for first-time buyers Proportunity has raised a £2 million in seed investments for its home equity lending platform. 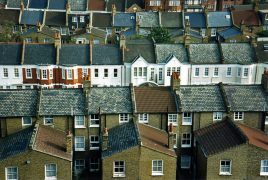 The startup says it’s the only help-to-buy challenger to date which has helped consumers actually own homes.

“Home ownership has become a major social divide between those who have benefited from capital growth and those who have not,” says Proportunity CEO Vadim Toader. “Our aim is to help open the door of home ownership that has been slammed in the face of a whole generation.”

The firm was authorised by the Financial Conduct Authority (FCA) last year, and provides first-time buyers with an equity loan of up to 15% of a property’s value. This means newcomers to the property market can put down a bigger deposit on a better-located property, and secure a more competitive mortgage with less interest charged by the mortgage lender.

Now with more than 5,000 users, the fintech wants to use the investment to improve its analytics and grow its network of real estate agency and mortgage broker partners, with a look to pilot its product in wider Europe.

Similar to the government’s help-to-buy scheme, which is due to end in 2023, Proportunity makes up the remaining 15% of a 20% deposit, so buyers with just 5% of a deposit can afford homes worth up to £150,000 more than what they could initially afford.

The fintech is open to all home-buyers, but its target market is first-time buyers. The AI-driven platform can also help those not savvy to the market locate cheaper properties in up-and-coming areas, as well as giving buyers data on crime rates in the area, school rankings, broadband speeds and pollution.

In contrast to the state-funded Help-to-Buy ISA, which began in 2013, Proportunity does not just support new-build houses. This loyalty to new-builds has seen the government drive up profits of house-builders like Persimmon, who have tripled their profit on each house sold under the scheme.

The government subsidy scheme has also led to significant house price inflation. According to a report by Shelter in 2015 – just two years into the scheme – Help-to-Buy had already inflated the value of the average home by £8,250.

The team behind Proportunity includes former-Booking.com engineer Stefan Boronea, who is now the fintech’s co-founder and CTO, alongside ex-Bain & Company consultant Vadim Toader. Neither of them knew anything about the property market, but now the fintech says half its team has bought homes through Proportunity.