Banks are increasingly worrying about the impact of big tech companies like GAFAA (Google, Amazon, Facebook, Apple and Alibaba) could have on banking. Previously I looked at how banks could learn from Amazon and also from Uber. But, why haven’t we worried about one of the greatest innovators and “disruptors” of the 21st century? 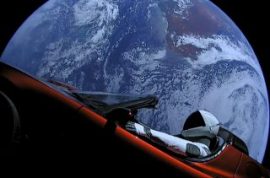 Since conquering the banking industry was too difficult, Musk focused on space instead

Elon Musk has revolutionised not only products but our thinking about how to save the planet, from sustainable solar power and electric cars to colonising Mars! If you’ve read his autobiography, you’ll know before he set up PayX (the company that later acquired and became PayPal) that’s exactly what he wanted to do. However, when looking at the complexity of banking he decided to focus on payments. What’s amazing is that he stepped back from this challenge and went full steam ahead with a plan to colonise Mars! Although Elon Musk couldn’t disrupt banking, he might think that he can colonise Mars.

When you consider there are 100 new companies providing banking services in the UK alone, with another 100 following them you might ask yourself was he wrong? What are the likes of Monzo, Starling and Atom doing to disrupt banking or are they simply providing choice and competition? Some of these have created their own core banking systems, and even in the core banking solutions space, a number of brand-new players like 10x, Thought Machine and Leveris have emerged.

So, the question is, have these new players created the same kind of disruption that Elon Musk has with Tesla. I’m sure a lot of comparisons could be made, for example revenue versus market share. In order to really answer that question, we need to take a closer look at Tesla.

Saving humanity by cleaning up the planet and colonising Mars so that mankind has a “plan B” is a pretty strong reason as to why customers should buy into Tesla. Not only will they get an amazing car, they’ll be contributing to saving mankind! Now the closest banks get to a strong why is making people lives easier/better through banking, not as compelling right? Even the Gates Foundation has a stronger “why”: by getting people into the banking system we can eliminate poverty faster. We are in an era where what the product stands for matters as much as how good the product is – gone are the days of buying a product because of the marketing hype, and in comes a strong recognition of what a company stands for.

I often present the difference between digital and digitisation and will probably post something along those lines sometime soon. Back to Tesla, they didn’t just create a better car by improving what others did. They started from scratch unencumbered by the legacy of previous designs. From creating the first “upgradeable car” to moving the engine to the centre and creating super-fast charging points. They really reinvented the car and not just upgraded it. When we look at banks, including challengers, who would you say has re-invented banking? Fintechs have reinvented mono product lines, for example, peer to peer lending or crowd funding, but general banking has just had an ‘experience’ upgrade.

Tesla looked at every aspect of the customer journey. Starting with buying a car in a retail outlet rather than at a car showroom in the middle of nowhere. Now you can browse clothes, electrical goods, food and your next car in the same mall, why hadn’t existing manufacturers done that? The driving experience itself was enhanced with a large screen and self-driving mode. When the car is short of fuel it’s already looked at where you can recharge without you asking it to. And charging the car, Tesla didn’t wait for others, they built their own charge points and came up with the technology to accelerate the charging process.

Going back to the “why”, this itself is awe inspiring and thinking about the sheer enormity of the challenge would stop most people in their blocks. Not Tesla. Starting with high end cars for a niche market of those that could afford it, their plan started to feel like it had legs when they launched a car for the masses. They also started to highlight Tesla’s ecosystem with PowerBank (storage to power the home) and solar powered tiles to generate the power. Suddenly the vision to clean up the planet seems much more tenable. Unless banks step outside of banking, they will never reinvent it, and never truly capture the hearts of customers seeking for something much more fulfilling than executing transactions cheaper, faster and from anywhere on any device… sound familiar?

Tesla didn’t setup an innovation lab, run a few hackathons and hire a chief innovation officer. Innovation is a core value, part of the way that everything gets done for example they were quoted 12 months for delivery of the world’s largest stamping press and this was unacceptable. So, they pulled together a team that looked at how they could get it into their factory in three to four months. From cutting inches off the press bed to modifying cranes, the team managed to pull the rabbit out the hat and bring the press in on time. There are many more examples, but the key point is that Tesla has innovation running through its bloodstream and doesn’t let anything get in its way.

Tesla may not be a threat to banks, but they certainly have the right principles to succeed in truly disrupting their market and thus set a strong example, not just to banks, but anyone seeking to create disruption.