HPE Discover 2019: has the thought of branch transformation pushed you over the edge? 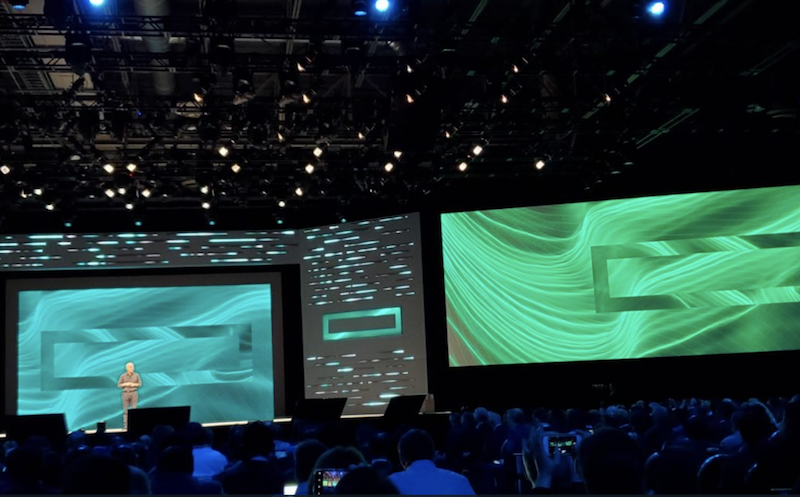 One of the largest big-vendor events just wrapped up in Las Vegas. HPE Discover 2019 pulls together all the communities where HPE products have a presence and there is none more passionate than the HPE NonStop user community. Richard Buckle reports.

How many of us really comprehend the impact NonStop continues to make in our daily lives? You can’t pull out your plastic and not have at least one NonStop systems engage with you, whatever the actions being undertaken. Credit, debit, loyalty, mobility, online – it doesn’t matter in the slightest as there is the presence of NonStop almost everywhere you turn.

With all the talk of transformation and open banking and yes, branch modernisation it would seem remiss of us not to raise the topic of whereto NonStop today? Yes, you may recall the Tandem Computers of the 1970s and 1980s, but with an architecture forty plus years old, is today’s HPE iteration of the venerable Tandem – the NonStop System we know so well – playing an important role in the plans of Financial Institutions (FIs)? In case you missed the news of the past five years, NonStop has been ported to the Intel x86 architecture, migrated its internal fabric from proprietary ServerNet to industry standard InfiniBand (and more recently, announced support for RDMA over Converged Ethernet for those looking to run NonStop virtual), and yes while HPE would prefer you run NonStop on HPE’s own x86 product line, the ProLiant, in reality you can run it on any vendor’s x86 server, including Dell and even Cisco as has been the case of late.

Talking of Cisco and probably just as interesting for FI’s CIOs is the news that NonStop suns atop VMware’s hypervisor – didn’t see that coming, did you? This is all well and good, but what about modern applications? Starting with support for Java, Perl, C/ C++ and yes, for the DevOps folks, Ansible, Jenkins, and much more,  they are all  now part of the ecosystem of open systems support for NonStop. Cost? When it comes to that four letter word, well, here’s the big news coming out of HPE Discover – there is now consumption based pricing (and support) whereby you can run NonStop-as-a-Service (NSaaS) and only pay for what you consume in terms of compute and storage resources.

As for data base and SQL then the latest NonStop SQL is anchoring HPE’s own IT digital core and with multi-tenancy support, is provided on the basis of DBaaS to every authorized user within HPE. Oracle compatibility certainly boosted the profile of NonStop SQL and made it very easy to move away from literally tens of thousands of Oracle instances. In other words, if you have not been keeping up, NonStop is now itself modern, transformed by HPE in much the same way as we are only talking about doing for our core to edge open banking platforms.

FIs have been running NonStop for decades in support of payments systems including the all-important payment switches at the center of these FIs’ operations. And why? Well, fault tolerance and the ability to truly run 24 x 7 x forever provides value and it’s the only out-of-the-box system IDC classified as Availability Level 4 (AL4), which is as good as measuring availability gets. However, in case you missed it, at this latest HPE Discover 2019 event HPE was demonstrating NonStop running on their Edgeline products. The demo was on an Edgeline EL4000, support for the Edgeline EL8000 isn’t all that far away. Point is, whenever there is an x86 processor, Ethernet interconnects and VMware – you can run NonStop and in this latest example, right out at the edge. Deploying NonStop anywhere a modern application deployment can benefit from 24 x 7 has appeal – and not just for bankers, but increasingly, retailers as well.

But what is the edge? Well it’s a manufacturing production line, it’s a farm, it’s a power station and it’s a truck. But it’s also a branch office no matter the industry. Anyway you care to look at it, today’s bank branch offices clearly fall into the category of being an edge. It’s where the data is first produced as a result of a transaction and it’s where the “brand” meets the end user. It better be working all the time, 24 x 7, in today’s always-on, always-connected world. HPE has a substantial ecosystem of vendors supporting NonStop but it was out of curiosity that I approached IR, an Australian listed public company, whose Prognosis monitoring product runs on the majority of NonStop systems deployed worldwide. What was their take on how NonStop has transformed at a time when there is as much discussion as there is about bank branches in need of transformation.

“Yes, you can look at data being generated as transactions occur and yes, you can load data into analytics platforms for analysis of trends, but in reality, being able to answer the simple questions in real time is just as important, if not more,” said Kevin Johnson, VP Sales – Payments Performance Monitoring at IR – Prognosis. “Why did the transaction just fail this very minute? Why is this region seeing performance degradation? Why are so many transactions being declined? They all demand immediate response and as we’ve seen HPE NonStop grow to be more scalable and high throughput, while at the same time fitting more seamlessly into the modern data centre, we understand that Prognosis also has to continue to evolve to monitor ever growing workloads in a new type of data centre.” IR has been the benchmark for all monitoring solutions on NonStop with the bulk of NonStop customers relying on Prognosis. There is the support for a single pane of glass just as there is visibility of multiple system components and networks and yes, even clouds. It truly is becoming a world of Hybrid IT, after all!

I have been a strong proponent for Prognosis through the years and am seeing nothing arise that deters me from proposing Prognosis wherever I am engaged on NonStop projects. With NonStop out on the edge, there are some really interesting opportunities arising that weren’t feasible without the presence of a data center platform like NonStop. Responding to local demand, filtering out the “digital exhaust” that comes with supporting “everything connected” and yes, providing an unmatched level of security has opened the eyes of many CIOs and watching as they saw NonStop running on the Edgeline EL 4000 – little more than a pizza box – sparked their imagination and with Prognosis, you will not need to build out the staffing levels you may thought such deployments would require.

When it comes to HPE and NonStop, HPE is committed to providing a number of breakthrough solutions but perhaps the two that hit a home run with FI CIOs is that HPE is committed to ensuring everything that runs in the data center today will be available out at the edge (including the branch) and that every product will be available on the basis of “as-a-Service”, supported as part of HPE GreenLake. If you are concerned every time you look over the edge, perhaps you need to get back up and take a look around. You may be very surprised to find out about exactly who is playing a leadership role in transformations everywhere!