A banker goes a-banking, volume 2: paper for the stone ages 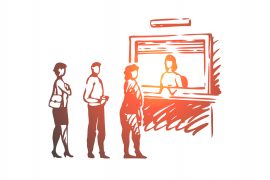 So I had to go to the bank today…

So I had to go to the bank today.

To the actual physical bank branch.

Because I needed more cash than you can get out of a cashpoint.

This is not a thing that happens to me often (either needing cash or needing the branch) and, as a result, the first thing I had to do was google where my non-challenger bank has a branch that is walking distance from the office. Turns out I walked past it every day for the past seven months and failed to notice it was there. Reflections on branding and the human attention span saved for another time.

Whatever. I walked over.

And the day’s surprises began.

First of all, I was not alone. There was a line. Of humans. In the branch.

They paid in cheques, mostly. Apparently that is still a thing. One spent a good 15 minutes chatting to the cashier. “Is your mum still in Ireland? Do you have a good relationship with her?”. I kid you not. Thankfully I have perfected the “no small talk” face and nobody asked about my familial bonds (I love you mum).

And then my turn came. And the real fun began.

Withdrawing cash from your account starts with a paper slip that you fill out.

You can’t just hand your card because that is silly talk.

You have to write your name, and address and the account number and the sort code and your bank’s address (I don’t know if that is a test, it felt like one: one I had not revised for) on a piece of paper that they keep behind the counter, not available to just anybody who walks in like the paying in slips. This is special paper. You have to wait in line for it. Ask a human. Get it handed over. Stand there and copy information from your card to this piece of paper and then stand while the human types the information into the system.

Then hand over ID.

Then debate whether this piece of ID is acceptable. Whether it is the same ID you opened the account with 22 years ago (no, passports expire, new ones get issued, no, I don’t have my old passport. Yes, I have another form of ID. No, you don’t have it on record. Why not? Because you never asked for it. Do you want to update your records now? No? Why not? Oh you can’t. I have to call the call centre. Can I do it online? No of course not, what was I thinking).

The know your customer (KYC) process involved this gem also: who is your employer.

That’s not what I have on record.

Well, you get my payslip every month, so it’s easy to check.

The best part is that for the branch staff this is not even madness. It’s what their floor supervisor told them to say and say it they do.

Then I had to wait. This is the best bit.

I had to wait.

For 45 minutes. While they fetched money. From somewhere other than the bank branch I was in. Because they didn’t expect to need money. Yes that’s a quote.

Ok. Seriously. I have questions.

Not even taking the data off your own card? The artefact you provide and is generally accepted as identification for a variety of other purposes not to mention a means of transacting, you will not leverage either for identification or for the data it carries about your own bank in order to action the transaction request?

I have to fill out a slip?

And periodically, you reprint batches of those slips and then load them in vans and pollute my air while you take them to branches all over the city. And then I come in to go through your analogue authentication and request process to get cash only to find out you store useless paper but not money? But before we get to that…

Why on earth am I writing your address on the slip? Fine, you want me to prove who I am. But why do I have to also prove who you are?

Back in the days of old, when records had to be kept in paper format, the client was asked to fill out the info to save the teller’s time. Cheeky but whatever.

In 2019 it feels like some sort of weird joke with no punchline.

All this happened today.

The paper. And the… shall we call it esoteric… KYC authentication.

And the waiting at the bank.

Because they don’t have money.

They have to fetch it from somewhere unspecified.

Cannot make it up.

If you don’t like the “Big Bang” theory (or you are a party pooper like Michal who doesn’t accept lizard and Spock as viable contenders), ignore the heading. It’s just a gimmicky way of mocking my bank for being squarely in the stone ages of paper and manual processes. Which is bad.

Of sticking to their old ways of doing things even after they have gone through the pain of building systems that can do better. Because process trumps toolkits, compliance trumps innovation and laziness trumps customer centricity. Every bloody time.

So, as surely as rock beats scissors, bank branches do not use their own systems. They have them. They just don’t use them. We know they have them. I use their App. I know how it works. I have seen their open banking strategy. I know some of their IT leadership (we will have words soon. I bet they don’t bank with themselves.)

Investment into stuff has taken place. I know that to be true. Just as I know that when it comes to your branch experience, you don’t entirely leverage the stuff you invested in.

And branches that don’t expect people to need money.

Which begs the question: what do you think you are actually there for?

Seriously. We often talk about the death of the branch. Do we need them? Why do we keep them? Is it for all the grannies who can’t use the app?

It is all for the stuff the bank won’t let us do without coming into the branch. Believe me, if i could take the cash out of a super secure, double factor authentication ATM, I would. And it can be done. And you, dear bank of mine, can do it. But you don’t so I come to the branch because you give me no choice. The way I leave the app and go to the webiste when you give me no choice.

I go where I can get the stuff done.

And that is driven by your system inadequacies and investment choices, internal politics and infrastructure overhaul timetables. So don’t blame it on the grannies. Your distribution is your own doing.

As the bank, you know what can be done where. I know you know because I have seen your omni-channel strategy roadmap.

I know you know it sucks that your payments experience is so erratic and you are trying (which is nice, speed up though, for the love of God) to harmonise the app and website.

And I know you know what the few things are that people have to come to the branch for because you give them no option but to do so. It’s not much. But it’s a thing and you know what it is.

So tell me, dear bank. How can you not have a couple of thousand pounds in your vault, mid-morning on a weekday, on a busy street in the City of London?

The amount is not exactly crazy.

The location not exactly remote.

And the ask is one of the three things your branches are there for. Just three.

But you had no money.

And after you asked me to confirm your address, and copy data off my card onto a piece of paper so your staff could copy it onto their computer, we both waited for a man to go to an undisclosed location to get the only thing you are meant to have and hold. Money. Not even that much of it in the grand scheme of things.

Because quarter earnings beat project deliverables. And project deliverables wrap system harmonisation. And inter-departmental politics poison customer centricity. And all together they crush digital strategy by forgetting the human at the far end of each transaction. Who used to know no better and expect no better.

But challenger banks and smart phones have taught us a lot.

And if you think that challenger crushing margin and #LedaWrites moaning is how this game ends, there’s a surprise coming: you entered a game or rock, paper, scissors and because you haven’t died yet, you thought you wouldn’t.

A common error. But often a fatal one. Because now lizard and Spock are in the running and whatever comes next (and come it will) will give you a run for your money. At least then we may learn where you keep it.

Continued from the first instalment of “a banker goes a-banking”, which you can read here. To be continued…