UAE and China to create new “Belt and Road” exchange 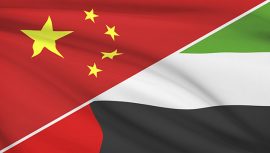 The new exchange “will serve as a key international capital-raising platform supporting Chinese enterprises, foreign companies and global organisations to finance their investments, including along the Silk Road Economic Belt network,” the two parties say.

“The partnership with SSE is a testament to ADGM’s commitment to China and further cements the deep mutual respect and existing long-term relationships between ADGM and various Chinese authorities and stakeholders,” they add.