Let’s get the start of the week going with some fintech funding action. This round-up features WorldRemit, PAIR Finance and an update on Sophia the AI robot and SingularityNET. 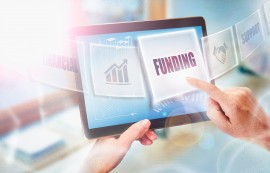 Money transfer firm WorldRemit has raised $40 million in funding towards its next phase of growth. According to the firm, the money will be used to expand its services through to 2020; by entering new markets, deliver new products, and scale the technology that underpins its mobile-first, digital model.

This latest round follows a Series A from Accel and Project A in 2014 and a series B investment raised from TCV in 2015. Since then, WorldRemit has launched 206 new services and has grown its transaction volume by 400%. Last month, WorldRemit became Arsenal FC’s first-ever online money transfer partner.

Next, the Berlin-based fintech company PAIR Finance has raised €4.5 million in series A funding from investors. Among them are Zalando, Hitfox Group and a selection of business angels within the German industry; including Maximilian Zimmerer, former management board member of Allianz; and Marc Stilke, former CEO of Immoscout. PAIR Finance’s existing investors FinLeap, Yabeo Capital and EY Ventures have also contributed with renewed investments into the company.

PAIR Finance says the funding and new partners will enable the company to expand its marketing strategy and its technology, based on artificial intelligence (AI). It continued by saying this will not only improve the payment cycle, but in turn helps companies to adjust their risk management to generate higher revenues. In the future, it plans to tap new segments that are in the process of digital transformation, for example, banks and insurance companies.

Finally, we have updated news about Sophia, Hanson Robotics’ artificial intelligence (AI) powered humanoid robot. At the start of December, Sophia asked the public to help fund her AI and revealed a token sale on 8 December. Since announcing SingularityNET, a blockchain-fuelled open source platform for AI and machine learning, she has received over $150 million in pledged orders from nearly 10,000 registrants.

As a result, the SingularityNET team has extended the sale of its AGI token to the second half of December. According to Singularity.NET, the design behind the platform is to allow everyone to have access to AI tech and become a “stakeholder” in its development. Anyone will be able to enter an AI/machine learning service into the SingularityNET for use by the network, in exchange for network payment tokens.