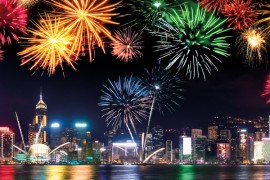 With sizeable market shares, China’s mobile payments giants Alipay and WeChat Pay are seeking international expansion. Zennon Kapron, founder of Kapronasia, a research and consulting firm focused on financial services in Asia, looks at what’s next for the tech giants.

China has gone through a tremendous transformation as 1.3 billion consumers change the way they pay, both online and offline, for anything from taxi rides to e-commerce goods. The tech giants Alipay (part of Ant Financial) and WeChat Pay (Tencent) have made payments mobile and in 2016 processed more than $5 trillion in mobile payments, the largest amount from any country globally. This has had an out-sized impact on China’s retail consumption. Based on Kapronasia research, in 2010, cash represented 60% of retail consumption, but has decreased to 45% today, and will represent less than 30% in 2020.

Although the tech giants have done a tremendous job shifting consumers over to mobile payments, the Chinese market is changing. Alipay and WeChat Pay have reached a combined 90% share of the mobile payments market in China, leaving very little for competitors, yet are themselves potentially hitting the limits of the market as the growth of overall users of mobile payments is expected to slow in 2017.

As the market shifts from a period of rapid growth to a more tempered expansion, the tech giants are looking for new ways to grow their business and seem to have settled on two main strategies: “platformisation” and international expansion.

For every app, there is a platform.

In the Western markets, users tend to have one app for one function. For example, they might use Facebook Messenger or Whatsapp for chat, Lyft for hailing a taxi ride and Venmo for payments. In China, all that functionality has been combined into the mobile payment wallets. As an example, WeChat started off as a social chat platform, but gradually incorporated payments and now has a variety of other products and services. Without leaving WeChat, you can book flights, invest in wealth management products, hail a taxi or even rent a shared bike. Similarly, Alipay has myriad lifestyle functions within the Alipay Wallet.

Clearly for both players, payments were the basis of what was to be a further digital expansion and offering. By keeping users in-app, the tech giants can drive revenue to other parts of their own business or of their business partners. However, even more important than the cross-selling revenue is the data.

As millions of Chinese use apps like WeChat or Alipay every day, the tech giants are building up an enormous trove of customer data. If you consider something as simple as hailing a taxi, the transaction can show location information, preferences (luxury or economy ride), as well as provide insight into customer behaviour (ratings).

So far, most of the data is used for simple usage cases. If you order food delivery, the app will suggest new restaurant recommendations based on your previous choices as well as pre-fill the address based on your location, but this is really just the start of what is possible.

Currently, Ant Financial has a credit scoring platform called Sesame Credit that analyses a variety of data-points to come up with a credit score for individuals and merchants. Baidu, China’s largest search engine, is focusing on the applications of artificial intelligence within the financial space, including stock picking and portfolio creation. Both are more sophisticated examples of how data can be leveraged to launch new products and services.

Although data privacy is a consideration, China’s consumers don’t seem to be as concerned. Kapronasia surveyed 1,000 Chinese millennials and nearly 50% were happy for the tech giants to use their personal search data to suggest a financial product. There seems to be a general acceptance that data is not particularly private in China anyway and that if data can be leveraged to provide a better product or services, customers are happy with the trade-off.

Beyond creating domestic platforms, Ant Financial and Tencent also have been expanding overseas. In India, Alipay has invested in Paytm and Tencent in Flipkart. Tencent has also pushed into Thailand and Alipay into Hong Kong and the US through its partnership with First Data and potential acquisition of MoneyGram. The forays overseas have followed a few different strategies.

First, the tech giants have followed Chinese overseas travellers. By expanding into popular Chinese tourist destinations such as the US, Hong Kong and Singapore, the tech giants can provide payment acceptance. This means when Chinese consumers are abroad, they can still use their Chinese mobile wallets to pay. In addition, it allows them to provide additional products and services. Alipay, for example, has partnered with duty-free programs such as Global Blue to allow travellers to receive instant cash-back for their overseas duty-free purchases.

Second, the tech giants have focused on acquisitions and investments in particular focus markets where they can partner to achieve better than average returns. Ant Financial, through Alibaba, invested in PayTM, India’s largest mobile payment platform. At the time, India’s mobile payment market was very nascent and the overall payment system and e-commerce market not as robust as in other markets. By entering the market and combining Alipay’s expertise with Paytm, they have had tremendous success in both payments and e-commerce.

Finally, the tech giants are setting up local currency-denominated wallets. Previously, opening a WeChat wallet was only possible for Chinese residents and the wallet would be in Chinese yuan. Today, residents of China, Hong Kong and South Africa can open WeChat wallets in their local currency. Similarly, Alipay is now available in Hong Kong.

This expansion will continue, albeit at a very gradual pace. Setting up a wallet involves a much more complex set of regulations and takes time. In the US alone, payment licences are awarded state by state so starting from scratch can take time. Ant Financial’s potential acquisition of MoneyGram is an example of how the company might be able to achieve this much more quickly than by an organic approach.

We should also expect the Chinese tech giants to pursue their platformisation strategy internationally, although this may be a slower burn as platforms involve quite a bit of understanding of customer behaviour. As much as every human eats, we all like to order our food differently and this changes by market. We have seen very few examples so far of tech companies being able to offer the same product and service in every market. Uber is a rare example, but is also struggling.

Clearly the tech giants have changed the way that China spends, the real question will be how they are able to sustain that growth both domestically and internationally in the future. Platforms in China have already shown their value domestically, but new regulations may force standardisation of payments and more restrictions on what they can do.

Internationally, the platforms also have their work cut out for them. Hopefully they have learned from the many foreign tech giants that have tried and failed in China, but expanding internationally will not be easy for either Ant Financial or Tencent. They will face myriad regulations as well as geographic and cultural challenges.

Nevertheless, China’s tech giants have the drive and funding to continue growing far into the future. There are characteristics that are unique to the Chinese market that may make it difficult to achieve the same level of success overseas, but certainly they provide excellent case studies on what is possible.

This article is also featured in the Daily News at Sibos 2017 – Day 3 edition.
Click here to read the issue online or pick up a print copy if you are at the conference!
The digital and print editions are free.