Where’s the humanity? Well, not here as this is an artificial intelligence (AI) round-up. Features Royal Bank of Canada, Emirates NBD, and the ten greatest threats to mankind.

Royal Bank of Canada (RBC) has announced a pilot launch of two digital services based on AI that offer insights about client’s financials and an automated savings solution that uses predictive technology to identify money in a client’s cash flow that can be automatically saved.

Called NOMI Insights and NOMI Find & Save, these can be used through the RBC mobile app. For example, NOMI Insights can give people a “head’s up when needed, like when a regular monthly payment is higher than usual”. 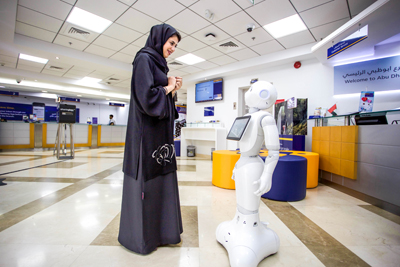 It’s a “fun element to the banking experience”

In the UAE, some news not to be sneezed at. Emirates NBD’s Pepper has now learnt to speak Arabic. The AI-powered humanoid robot, brought to the nation by Emirates NBD last year, has been “widely popular due to his novel proposition and charming personality”. (Pepper was of course created by SoftBank Robotics in Japan.)

The bank wants to add a “fun element to the banking experience” and the bilingual Pepper will continue to interact with customers at the bank’s Jumeirah Emirates Towers and Dubai Mall branches and provide assistance with issuing branch queueing tokens, presenting information about products and services in an “engaging manner and obtaining customer feedback through a happiness meter”. I know all of you are smiling serenely and radiating with joy as you read such happy news.

Finally, Times Higher Education (THE) asked a group of 50 Nobel Prize winners about the ten greatest threats to mankind. THE says the survey covered laureates in science, medicine and economics – and as you guessed AI was mentioned. But just to clarify it was not seen as one of the major risks, so there is some good news.

In terms of the results, 34% said population rise or environmental degradation was the biggest risk. Second place was nuclear war. However, the idea that AI will threaten humanity will crop up time and time again. Many people always turn to science fiction books/movies for their fears – such as SkyNet from the Terminator franchise or HAL 9000 from 2001: A Space Odyssey. But I have yet to read someone mentioning another film about an AI becoming too powerful – namely Colossus: The Forbin Project. Worth a watch.