Correspondent banking relationships have reduced globally by 25%, despite the fact that global GDP per capita grew during the same period, following the 2008 financial crisis, according to research by Accuity. 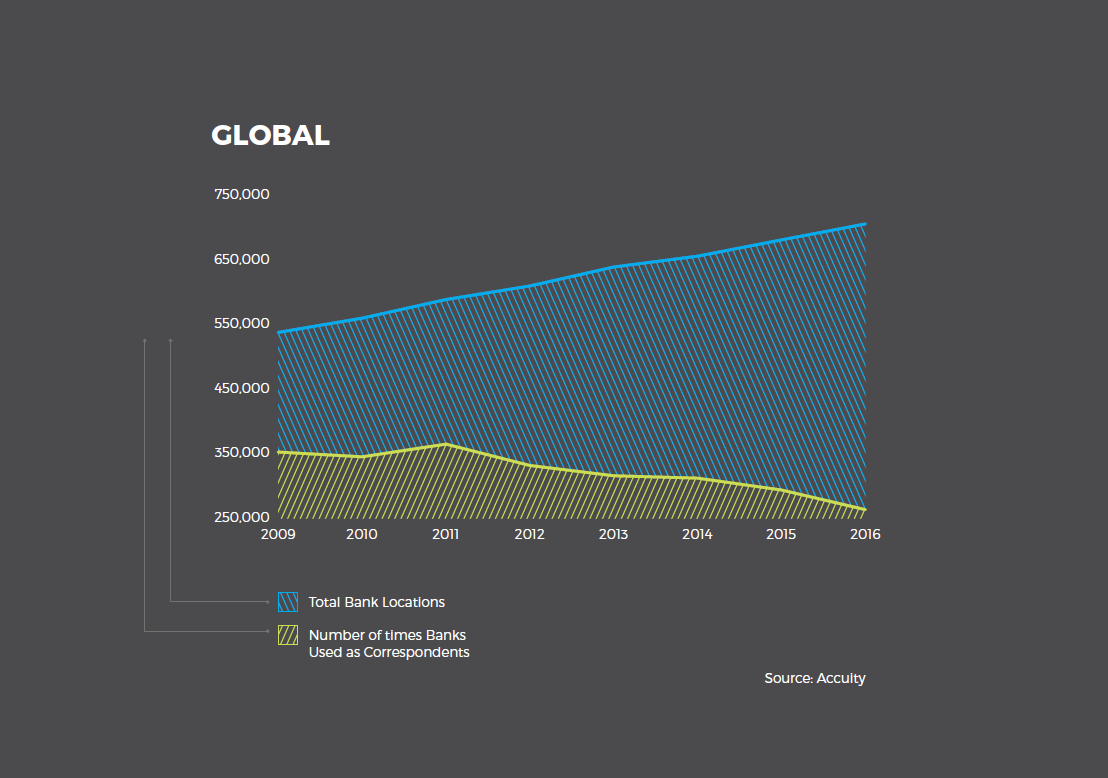 Henry Balani, global head of strategic affairs at Accuity, says: “The irony is that regulation designed to protect the global financial system is, in a sense, having an opposite effect and forcing whole regions outside the regulated financial system. This matters because allowing de-risking to continue unfettered is like living in a world where some airports don’t have the same levels of security screening – before long, the consequences will be disastrous for everyone.”

Since the global financial crisis of 2008, Accuity says regulators have imposed requirements for greater transparency, established higher liquidity thresholds for banks as well as stepping up enforcement actions on institutions that violate anti-money laundering (AML) regulations.

In this climate, the “threat to banks of doing business in these geographies potentially outweighs the benefits of services to their clients, even if there may be good business opportunities to pursue”.

According to Accuity, the challenges of increased operational costs, competitive and regulatory pressures have driven banks to withdraw from correspondent banking relationships. Historically, these relationships were provided as services to international customers, but this is no longer viable, as banks cannot justify the increased compliance cost associated with offering correspondent banking services to their local customers. As a result, businesses in the regions most affected are struggling to access the global financial systems to finance their operations. Without this access, local banks are forced to use non-regulated, higher costsources of finance and expose themselves to nefarious actors and shadow banking.

Accuity says a decline in USD relationships is either indicative of a concentration in relationships or a reduction in USD dominance.

Findings from its research reflect the number of correspondent banking relationships transacting in particular currencies rather than the volume of currency transactions. Accuity’s research shows a steady decline in the number of USD correspondent banking relationships globally since 2014. The USD was the currency of choice as the global economy recovered from the global financial crisis in 2008. While USD continues to be the currency of choice, the rate of decline in the number of USD relationships further accelerated with a drop of 13% between 2015 and 2016 from a decline of 2% between 2014 and 2015.

Global bank locations in developing economies have also increased by 31% since 2014, largely due to growth in China and APAC. This is significant as the number of banks in established global financial centers are in decline.

Accuity states that actions from US and European regulators have resulted in banks shunning higher risk economies while missing out on the potentially profitable use of their currencies for correspondent banking, in the process.

Its research reveals that the areas benefiting from the changes are largely in the East. For instance, China has experienced a 133% increase in the number of banks since 2009 and an astounding 3,355% growth in correspondent banking relationships during the same period.

Balani says: “The decline in USD relationships has several explanations: either we are seeing a concentration in USD relationships among fewer correspondent banks, or we are seeing a decline in USD dominance. The shift can also be attributed to the potential AML penalties associated with using these currencies. Since the financial crash of 2008, we have also seen significant commitment from financial institutions in emerging economies to demonstrate they are not high risk. We see this playing out in the East and the increased number of relationships reflects their commitment.”