With the release of Facebook’s Q1 2017 results, there are five things worth your attention about its strategy that are relevant for financial services.

In its latest results, Facebook announced a major emphasis in solving for communities and reiterating the key messages from its F8 developer conference. 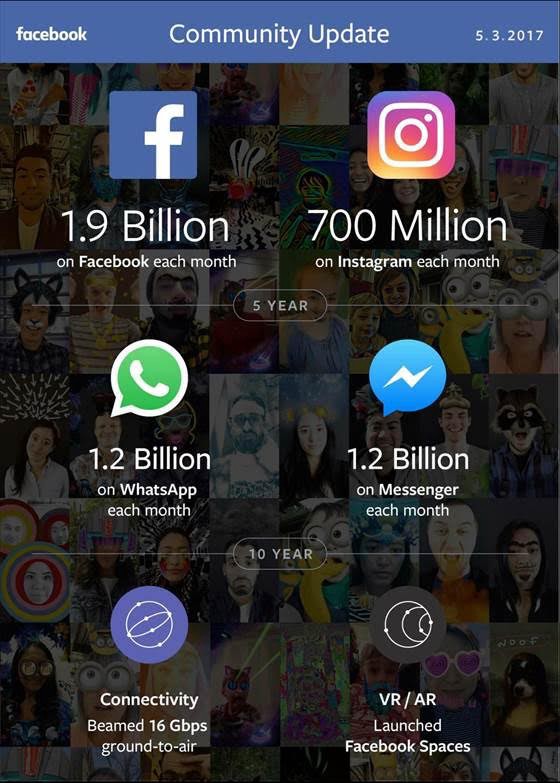 Five things are worth your attention from the F8 developer conference:

Facebook is turning its camera feature into a platform where any developer can build augmented reality. The move of Mark Zuckerberg in the space is clearly to counter Snapchat and its recent IPO, which plays on the size of Facebook’s customer base.

This fits its ten year roadmap. As a first step, it launched Facebook Spaces for social reality platforms where friends or workers can hang out together. It’s been already received very well in countries like India. For banking it’s a long shot over the next ten years but this will turn experiences and interactions with a “video-first lens”.

The social network now counts 70 million businesses with five million active monthly advertisers, up from 2.5 million at the end of 2015. It’s a key gateway to converting small and medium sized businesses into advertisers on the social network but also running their businesses through the network with features like Marketplace. More than one million of these advertisers are in emerging markets, according to Sheryl Sandberg, Facebook’s COO.

Facebook Messenger’s overall vision is to be the go-to source for business listings (1.2 billion users with 30 million in the UK, 20 million businesses every month answering queries and 100,000 bots), i.e. the Yellow Pages of the internet and chatting with friends – including Spotify integration and games. Some will argue it’s following the trend of China’s WeChat, belonging to Tencent.

Facebook signed deals with Amex, PayPal, WU, Wells Fargo, Mastercard and Moneygram, which was recently acquired by Chinese giant Alibaba, to push the expansion of AliPay in the US. A long shot since the service launch in 2015.

With the delivery of ‘M’, its artificial intelligence (AI) feature, we shall expect automated suggestion for sending or receiving payments or augmented experiences such as suggesting delivery and payment orders if you are chatting with friends about having dinner.

Facebook’s vision in the space is to “automate beyond buying” – providing transparent and convenient payment transfers and we could speculate potential consumer lending at marginal costs for the user, with the transaction information feeding into the main ad business.

It is expecting to deploy in EMEA this year following the grant of a payment licence; and various banks have completed a Facebook Messenger bot experiment and are currently piloting Facebook rewards .

WhatsApp (1.2 billion users with 30 million in the UK) is pursuing its strategy to be the channel of choice for secure communications.

Facebook’s workplace is pursuing a very fast expansion and they have been initiating this with job adverts. However, we are yet to see the future vision of Microsoft with the launch mid next year of its new division Microsoft Digital, that is likely to include a future strategy integrating “work environment + jobs + learning” following the acquisition of LinkedIn. So, still early days!

By Claire Calmejane, director of innovation at Lloyds Banking Group.