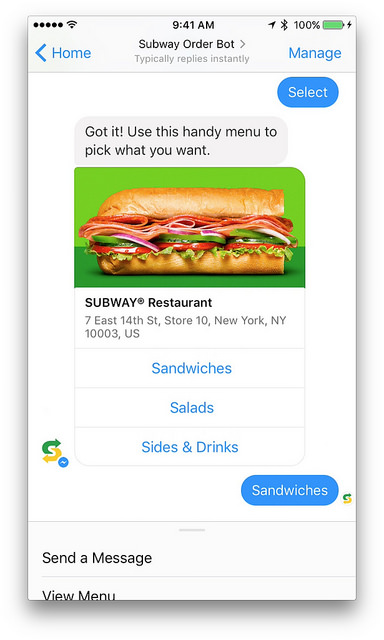 Hungry Facebook Messenger users can order a meal, do their grocery shopping or send a gift card for a sweet treat without leaving the messaging platform. Mastercard announced April 18 at the Facebook Developer Conference that it has launched Masterpass-enabled, artificial intelligence-powered chatbots with Subway, FreshDirect and The Cheesecake Factory.

The chatbot’s conversational interface enables consumers to interact with the merchants by making an order and paying for it using the Masterpass digital payment service. For example, the Mastercard bot on Messenger will guide consumers through their orders, whether it’s a sandwich to be picked up at a nearby Subway, food items from FreshDirect delivered to the customer’s door or selecting and sending via Messenger a virtual gift card for The Cheesecake Factory.

“With chatbots, retailers can go where there consumers are already spending time … and consumers can buy goods without leaving apps such as Facebook Messenger,” says Matt Miller, Mastercard vice president, product management, commerce for every device. “In this environment, Masterpass makes conversational commerce more simple, secure and seamless.”

More Bots on the Horizon

Miller says Facebook Messenger was chosen for the launch because it’s one of the most-used apps globally, with 1.2 billion users. He adds that Mastercard is testing the integration of “key products and services” with other social media messaging apps, but Mastercard is unable to share those plans at the moment. Likewise, Mastercard is working with other partners on chatbot projects, including financial institutions, and will be announcing them when they’re ready to launch.

Mastercard is bullish on the future of chatbot usage. Miller says chatbots provide several advantages to Mastercard partners that help them “personalize, customize, digitize and socialize,” including:

“When you look at the explosive growth in purchases made on smartphones, you can see why the retail industry sees so much opportunity in mobile,” Miller says. “Apps have become the foundation of our internet usage.”

Editor’s Note: Look for our feature story, “Rise of the Bots,” in the Spring edition of Pay Magazine.