The UK gets new coins, but why? 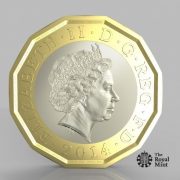 The most secure coin in the world

As of March this year, UK’s one-pound, two-pound and 50p coins have all been upgraded to become “the most secure coins in the world”.

Following on from reports that their predecessors were easily forged – to the tune of 44 million coins (roughly one in 40 in current circulation) – the UK government decided enough was enough and put in motion their termination and replacement. However, with the rise in cashless payments, online transactions and mobile banking, is there any point?

The Buggles classic song heralded the age of music videos and was the first ever played on MTV. As the lyrics, and that fact, highlight, old technologies don’t tend to converge or sit beside their replacements – they’re killed off by them. Just as music streaming is killing CD sales and Uber is taking down the taxi companies, the full package of convenient contactless payments finally seems to be doing away with cash.

Back in 2015 the BBC reported that for the first time ever, cashless payments had overtaken the use of notes and coins in the UK. With everyone from businesses to consumers preferring to use cashless payment methods, by a majority of 52% to 48%, it was clear to see two years ago, that physical tender – like the GBP against the USD after the more notable 52% to 48% split – was on the decline. Expert projections from that same article foresaw cash volumes to fall by 30% over the next ten years, the equivalent of cash being used by about a third of consumers by the year 2024.

The decline in cash transactions ultimately marks a (belated) shift towards the modern, convenience economy that many countries have already adopted. Just as food and gift shopping is becoming more streamlined to the point of drone delivery and click-and-collect, paying for goods and services (and banking) is now ever more seamless and efficient.

And for good reason. Let’s face it, carrying cash is annoying. Unlike the digital wallet system present on your Smart Phone or contactless card that remembers how much you have left, cash fits the archaic “pay as you go” model of topping up once you run out.

To top up, you have to find an ATM and if, for whatever reason, it’s out of service, out of cash or looks like it’s been suspiciously tampered with, you have to go to a nearby shop and buy something you don’t need just to get cashback. Once you have the money in your wallet, the situation isn’t much better: coins and notes are bulky, noisy and easily stolen or lost. It’s not hard to argue that the whole concept is clumsy and outmoded.

So why the expensive change?

With all the problems listed above, not to mention the fact that no matter how secure you make your coinage, it will always be the go to choice for those in the black economy, spending an optimistically estimated £20 million to alter just parking machines alone to accept the new coinage is a huge cost for businesses to soak up in age of tighter public spending and decreased visits to shopping centres and high streets.

Wouldn’t the government be better placed increasing contactless security, adoption and digital currency acceptance to bring the UK more in line with Sweden and China, than fixing a soon to be outmoded problem? Just as high street Bank branches are closing down due to decreased customer demand, in light of increased mobile and online banking, fixing an analogue problem with an analogue solution seems a complete waste of everyone’s time and money.

How long will it take before the new coins are compromised and we have to go through this whole process again? For a payment method that’s noticeably decreasing in popularity, the changes are looking expensive to say the least.

Of course, this view isn’t shared by everyone. There are concerns (and rightly so) from some about how secure a purely cashless society would be. Would the government and “elites” look to create an Orwellian mass surveillance model using contactless cash as the conduit? What if the online networks storing our data were breached or failed? Will we ever be able to fully trust NFC and contactless technology in light of recent events?

These are all important questions that need answering, but looking through the history of how money has developed, we started off without physical tender, and on current projections, it is more than likely (and preferential for this writer), that we return.

There is, of course, still huge demand for cash and the point of this article isn’t to wish its existence away tomorrow. For many small and mobile businesses, news agents and consumers, cash is very much king.

But we really need to question how much longer will physical tender be supported by the masses, and if the answer is either “we don’t know” or “not for long”, then the vast sums of money spent on combatting coin counterfeiting surely amounts to money lost on what could have been better invested in preparations for the digital future.