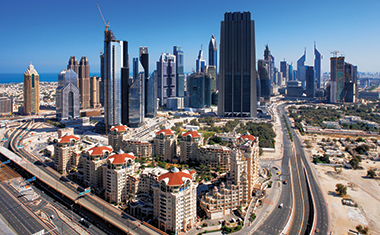 Blockchain heats up in Dubai

The plan is to explore the use of logistics solutions for the import and re-export process of goods in and out of Dubai. Using Hyperledger Fabric and IBM Cloud, their blockchain solution transmits shipment data allowing participants to receive real-time information about the state of goods and the status of the shipment.

Amr Refaat, general manager, IBM Middle East and Pakistan, says: “IBM believes that blockchain will do for transactions what the internet did for information.”

As with similar initiatives in trade finance, the aim is to replace paper-based contracts with smart contracts. It will also use IBM Watson’s internet of things (IoT) for device-reported data to update or validate smart contracts.

In February 2016, the Dubai government declared its interest to position itself as a blockchain hub and embrace the technology. As part of this declaration, the Dubai Museum of the Future Foundation established the “Global Blockchain Council” in which IBM is a member. Furthermore, Dubai plans to execute all its transactions on a blockchain by 2020, as a part of its “Dubai Blockchain Strategy”.

Kasikornbank (Kbank), one of the largest banks in Thailand, is also exploring blockchain with IBM, “to save costs and speed up transactions”.