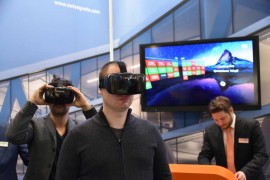 The VR headset creates a 360° trading wall for users to monitor the markets.

Eye-tracking technology enables users to bring up more information about a specific stock and execute trades to a preconfigured value by focusing their eyes on the symbol.

Clients can also view the status of their accounts through the VR headset.

Swissquote CTO Paolo Buzzi comments: “While it is true that the use of VR helmets is still marginal, building our application allows us to also perfect Swissquote’s existing applications on other devices, therefore accelerating our own technological evolution.”

For instance, the Fast Trade tool, initially developed for the VR headset, will be built into the bank’s Apple Watch application.

Ahead of the game

Back in 2008, Swissquote became the first bank in Switzerland to launch its own iPhone trading application, followed by an iPad version two years later.

In 2010, it became the first taker of the Java version of Temenos’ core banking system, T24.