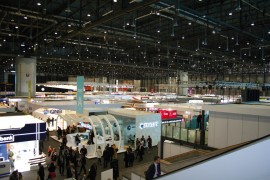 Sibos 2016: all about blockchain

“First they think it’s stupid, then they think it’s obvious. Blockchain has passed the first test.” These are the words of an economics professor (quoted, but not present) on revolutionary ideas, and perhaps a succinct evaluation of where blockchain is right now.

In a packed conference room on the Monday afternoon (26 September), the panel discussed “Blockchain 2020 – what next for adoption by the financial industry”.

The anecdote on revolution was related by panel member Vivek Ramachandran at HSBC and was one of the themes from the hour-long chat.

The moderator, Brian Behlendorf, executive director at the Hyperledger Project, sought specifics and where blockchain has been involved in pilots or use cases.

Justin Chapman from Northern Trust says it has a “case to do most things” due to its efficiency, but he says it won’t work for fixed income yet as it’s “not mature yet”. Northern Trust has been deliberately focusing on smaller ecosystems in its use of blockchain.

Ramachandran says for shipping (and trade finance of course), distributed ledger technology (DLT) “lends itself to this nicely”.

But Behlendorf, perhaps expressing the sentiments of many in the audience, asked if we are going to be “stuck in ‘pilotville’”?

He has a good point as people were talking about blockchain at last year’s Sibos and some will want to see some real action.

For Ashwin Kumar from Deutsche Boerse, “apps will appear in the next 12 months”. No specifics were given, but “where there is a chain that can be controlled, that could lead to apps”.

On the topic of the ecosystem, the moderator wanted to learn more about the government’s role and how it can enable this to happen.

Chapmans says governments’ roles are “absolutely critical” but notes that we are seeing different levels of engagement”. In some countries, there are sandboxes for SMEs, yet in others “no action”.

Other nations have taken a more strident approach and are “trying to change legislation to promote rapid innovation”.

Ramachandran, who was often in agreement with Chapman, believes regulators like blockchain as it “lends itself to [controlling] financial crime and regulations”.

David Treat from Accenture gave an example from Washington DC where regulators are “fighting over” the innovators’ attention. Another plaudit for blockchain and he believes the US regulators should be given “credit for that change”.

While Philippe Denis at BNP Paribas gave the French view. The regulators in France have been “positive about talking” on the theme, and “this is why we have an opportunity to push it”.

However, Kumar warns that “regulators are open to experimentations but have no appetite for wholesale changes to regulations”.

He adds that “we are very far away from a regulatory framework”.

While blockchain benefits from positive reports from the press and analysts, the moderator asked whether “winter is coming”? Will we see a dip in the cycle or a lack of interest?

Chapman says unless there are disasters, the public will not be concerned. He also argues that if people can show a timeline and value within it, then blockchain can keep powering on.

For Ramachandran, the threat of a cold spell was not worrying.

“Collaboration is key as having multiple ecosystems will not work. We also need to take out the jargon and make it more accessible. Education is also a big part.”

Kumar believes “there will be several different protocols” due to the different use cases and ecosystems.

Elsewhere, the discussions briefly looked at immutability, permissible chains and cybersecurity, but added nothing new to what has already been said.

Near the end, Chapman, resolutely positive as always, says due to blockchain “we look at the world in a different way” and that “I have not seen this much collaboration in my 29 years in the industry”.

While stories usually have happy endings, the final word should go to the audience.

As with last year’s Sibos, some still seemed a bit confused and sought clarification on its use.

But one attendee seemed genuinely exasperated by blockchain. His feeling was that it was all hype and talk. He wanted to see genuine use cases and where it had moved beyond pilots.

The panel did try to address his concerns, but he did not seem overly convinced.

How patient can the blockchain watchers be? Will next year’s Sibos be saying the same things on blockchain?

Want more blockchain stories? We are happy to oblige. Read our round-up Sibos 2016 stories on this subject.