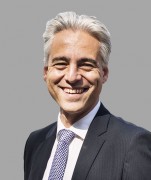 Western Union Business Solutions has unveiled a brand new payments platform for SMEs, WU EDGE. The project has been 18 months in the making and is available to new and existing customers for free.

WU EDGE is cloud-based, and is designed to be a single global payments tool for businesses worldwide.

EDGE stands for “Enterprise Digital Global Exchange” and Western Union says it will create a “simple virtual payments arena” for SMEs to connect, “making buying and selling overseas as easy as trading on one’s doorstep”.

The platform has been developed from scratch, says Kerry Agiasotis, president of Western Union Business Solutions, but of course “it leverages the existing assets and expertise” of the payments giant that is Western Union. It was built by an in-house IT team (which consists of around 150 people).

The first module – a new FX/cash management tool – was released last year. It has around 5,000 users and now forms part of the WU EDGE. The users will be encouraged to adopt the broader offering and also to invite their beneficiaries and partners to join.

Agiasotis says that Western Union’s network of 100,000 business clients has two million beneficiaries – a lucrative potential addition to the WU EDGE user list. “Just connecting them will be a great traction,” he comments.

As mentioned earlier, the solution is provided at no cost. Western Union makes money on transactions.

Not everything at once
Western Union has opted for a staged roll-out, says Agiasotis. The new network payment feature will be available as a “near real-time” service for 22 currencies to begin with, to be increased to 44 currencies and real-time in the next few months.

The first six markets are Australia, Canada, New Zealand, Singapore, the UK and the US. New markets will be added in the course of 2016.

WU EDGE was officially unveiled at the Money 20/20 Europe conference in Copenhagen.