Trust, data, and why marketplace lenders are here to stay 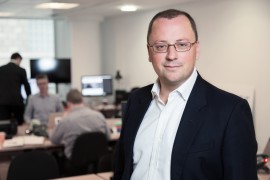 New peer-to-peer platforms that match lenders with borrowers are proving to be more efficient than banks at connecting those with money and to those that need money. Known as marketplace lenders, this new industry is still very much in its infancy, currently representing a tiny proportion of total loans compared to bank lending, writes James Sherwin-Smith

At present, small marketplace lenders can compete with much larger banks. While they lack the banks’ economies of scale, they often enjoy favourable regulatory treatment and use more modern technology, unencumbered by the complex, out-dated systems that plague most banks. A cursory glance at any bank’s financial statements and you find three line items constitute the majority of their cost: people, premises and IT.

With more technology in the hands of customers, financial services can be delivered digitally, and the need for people and premises is reduced. No surprise therefore that many banks are investing in IT and restructuring their operations, consistently shutting branches and shedding jobs.

This will likely be the trend for the next decade. So let’s fast forward a few years. As banks continue to restructure and invest in IT, will marketplace lenders lose their technological edge? Possibly. As marketplace lenders get bigger, will they become regulated in a similar way to banks? Probably. Does this mean that marketplace lenders will prove a temporary phenomenon? Absolutely not.

Marketplaces operate in a fundamentally different way to banks. Banks typically earn most of their income from interest: the margin they extract from borrowing money at one rate and lending money at a higher rate. In order to maximise profits, banks look for ways to increase margins, by charging borrowers as much as they can, and paying savers as little as possible. The best way to achieve this is by knowing more about their customers than their customers know about themselves. By gathering customer data, banks profit from the information asymmetry they create – literally they bank on customers not knowing that they can get, or their reluctance to switch to, a better deal elsewhere.

By being more open with the cost of financial services, and focusing on efficiency and delivering better value to their customers, marketplace lenders are well placed to establish a relationship with their customers that engenders trust. Trust is important in any relationship, as it creates openness and sharing that makes both parties stronger. Within a financial services context, this is usually signified by greater information exchange between both parties.

In an era of free digital services from the likes of Google and Facebook, many are right to believe that if the digital service is free, then your data is likely being sold to a third party to help pay for the service. But note – the opposite is not necessarily true: if you’re paying for the service, the data may not belong to you, and you may not be fully in control of its use.

Take banking data for example. Next year is expected to be a pivotal year when it comes to information sharing in a financial services context. The UK is pushing hard for more ‘open data’, whether that be in the form of banks being required to share data with credit reference agencies, proposals to extend the consumer ‘midata’ initiative to SMEs, and the promotion of an open API standard for banking. At a European level, there is growing support for key provisions included in the proposed second Payments Services Directive (PSD2) that would allow third parties to access to your bank account data and process payment instructions on your behalf. While it’s encouraging that bank customers will be able to extract their data from their bank, and share it with third parties, a lot of attention will focus on how permission is granted, and to whom.

Further, as businesses conduct more of their operations in a digital context (for example, moving to cloud accounting solutions), they will become more focused on how their data is stored, processed, and what ownership and control they can exert on its use, and on what terms it can be shared.

Financial services firms that have access to the most data, and can process it to create meaningful insight for their customers, will succeed. Marketplace lenders are well placed to win, given their usage of modern technology and the ability for their customers to share their data taken from banks and other service providers – but above all else, they are built with one primary motivation: to first and foremost, create value for their customers.