Viewpoint: All I Want for Christmas Is a Gift Card

The National Retail Federation (NRF) just published its annual holiday consumer spending survey,[1] which showed, for the eighth year in a row, that gift cards are the preferred gift for the winter holidays. Sixty-two percent of respondents would rather have a gift card than clothing, books, CDs, DVDs, video games, electronics or jewelry. This will translate into a near $100 billion spend on gift cards in 2014.[2]

Blackhawk Network’s research department has been tracking the preference of gift cards over physical gifts for the last five years. When respondents are asked which they prefer: a gift card from their favorite store versus a gift selected for them, about 75 percent say they’d prefer the gift card.[3] Why are gift cards so coveted? For recipients, it’s about control and choice. For some givers, it’s about convenience. For others, it’s the reassurance of knowing recipients are getting what they want.

Is It Really the Thought That Counts?

You can establish, define, solidify, repair or even ruin a relationship with a gift. Nothing else you buy has such social significance. Buying a gift is not like buying laundry detergent. Gifts are symbolic of relationships, and recipients look for the meaning behind the gift. Determining the status of a relationship and coming up with ideas for good gifts that symbolize that relationship often is a challenging social and economic activity, making picking out the perfect gift daunting. And, above all, the giver wants the recipient to be happy with the gift.

From Getting to Giving 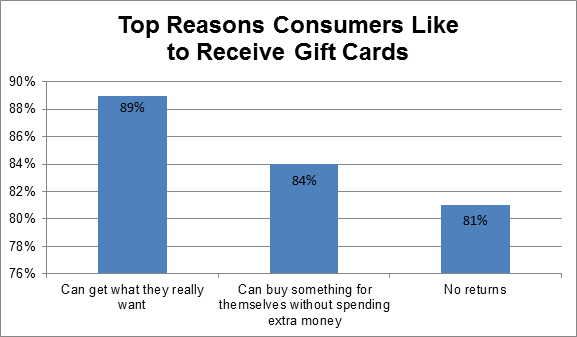 We’ve spent nearly a decade studying the reasons people want gift cards. We’ve seen the progression of the gift card from a new type of gift to the mainstream. When we first launched consumer-sentiment studies in 2006, some groups of consumers felt gift cards were too impersonal. This attitude was especially prevalent among older consumers. Yet, younger people wanted gift cards. This created a gap between what was desired versus what was being purchased. Every year, however, we’ve seen more and more older consumers buying gift cards to please the younger crowd.

One reason the gap has narrowed and older consumers are buying more gift cards is that these consumers began receiving gift cards themselves and liked them. We’ve seen a correlation between the receipt of a gift card and a subsequent purchase of gift cards for others.

Now that most people have received a gift card, consumer attitudes toward gift cards have changed. Today, only 4 percent of respondents in our consumer-sentiment study describe gift cards as very impersonal, compared with 17 percent in 2008[4]

People generally are very happy receiving gift cards. They are desired gifts because recipients can exert some control over what they ultimately get. Gift cards provide the freedom of choice without the hassle of returns.[5] Recipients also appreciate the ability of being able to buy something for themselves without spending any of their own money.[6] It’s as if they’re given a shopping spree (see chart).

For gift-givers, gift cards help lessen the anxiety that comes with wanting to select “the perfect gift.” Anxiety around gift-giving escalates during the holiday season. But why does something that’s supposed to be enjoyable create so much anxiety? Professor David Wooten at the University of Michigan developed a model regarding the role of anxiety in gift-giving, where he found that people become anxious when they want to make an impression but aren’t sure they can.[7]

This was reiterated in a Blackhawk Network study on the fear of gifting. More people are afraid of buying an inappropriate gift than driving a car.[8] Gift cards offer a solution to this problem by bridging the gap between cash, which is still perceived as impersonal, and an actual item, which can be a risky gift. Gift cards are perceived as a more personal gift than cash by most (81 percent) consumers.[9] Only 5 percent feel that when receiving a gift card from someone, there was not much thought put into the gift.

Part of the reason gift cards are perceived as more personal than cash is that the recipient tends to treat herself when she uses the gift card and cash more often is used to pay bills or to buy household necessities.[10] The gift-giver also chooses a specific gift card for that person, so personalization is not lost. Even network branded gift cards are chosen specifically for recipients who value the additional option of choosing a gift from practically any store. In a study specifically about Visa gift cards, gift-givers said they mostly buy Visa gift cards when they’re unsure of the recipient’s wants or needs (teens, etc.), and 91 percent of Visa card receivers were satisfied with receiving one.[11]

Not the Lazy Way Out

The claim that people give gift cards mainly due to convenience is largely false. Although our recent segmentation study identified one group of gift card shoppers who primarily are motivated by their own convenience—about one-third of gift card mall shoppers—all others were motivated by what the recipient wants. In fact, 84 percent of the respondents said they prefer to give gift cards so the recipient can choose what he or she wants.[12]

In 2008, with our first segmentation study, we found a segment of consumers who disliked gift cards because they preferred giving gifts with more emotional meaning and perceived gift cards as fairly impersonal. In 2014, this segment has changed radically. The same consumers who want to purchase emotionally meaningful gifts now prefer to buy gift cards because they recognize the emotional value of “choice” and feel it adds to the overall quality of the gift.

Not a Novelty Anymore

Gift cards have become a mainstream gift for many occasions and holidays. This is evidenced in many studies, including Blackhawk Network’s own surveys. Contrary to some of the recent headlines connected to the Deloitte Holiday Survey, which suggest that gift cards are a novelty, most industry studies confirm that gift cards are a common, popular and wanted gift.

Tammy Durston is senior director of research at Blackhawk Network, a Pleasanton, Calif.-based provider of prepaid and financial payments products. Her research helps guide Blackhawk’s strategy for its diverse product lines and geographies. She can be reached at [email protected].

[6] 84 percent like to receive gift cards since they get to buy something for themselves without spending any extra money. Blackhawk Network, Gift Card Tracking Study, February, 2014. N=809

[13] 37 percent said they received a gift card from a store that he or she normally didn’t shop at then began shopping there on a regular basis. Blackhawk Network, Gift Card Segmentation Study, April 2014. N=2,532