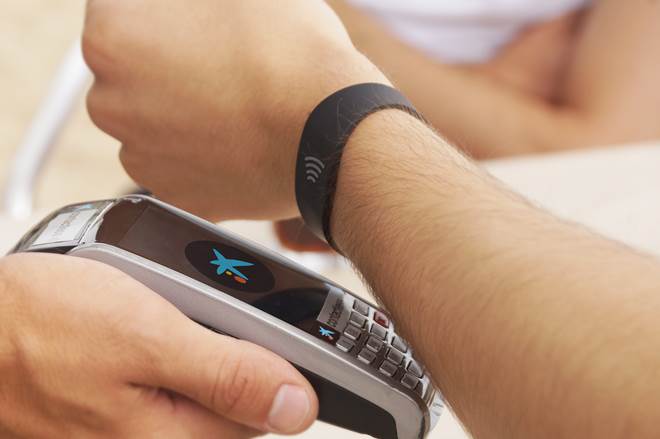 CaixaBank, one of Spain’s largest banks, has moved into the wearable payment technology space with the launch of an NFC-enabled wristband capable of making contactless payments. Security vendor Gemalto has supplied its Optelio Contactless MiniTag, which links the wristband to the user’s existing payment card.

As wearable technology becomes increasingly targeted for mobile payments, the wristband provides a natural extension to contactless cards for consumers, to whom CaixaBank provides more than four million contactless cards throughout Spain.  The device will be made available this month, and has already been distributed in preliminary volumes to account holders, and is also available at all CaixaBank branches.

Gemalto’s Optelio Contactless MiniTag enables the device to conduct payments of up to €20, and also integrates EMV functionality, allowing users can conduct transactions beyond the contactless limit by using their normal PIN. At present, the wristband can be used at more than 300,000 contactless terminals across Spain.

With the wearable tech industry on the rise, Gemalto believes engineering a variety of payment methods is essential to ensuring customer satisfaction. “The wearable devices market is booming, with around 70 million units projected to be sold in 2017,” said Philippe Cambriel, President for Europe, Mediterranean and CIS at Gemalto. “In line with this major global trend, CaixaBank’s new product launch re-enforces their pioneering spirit, well proven in providing innovative technologies such as contactless cards, mobile services and now wearable devices, so as to always offer their customers the payment method that best fits their needs.”

It remains to be seen how strong the demand and uptake of the wearable payment wristband will be. However, the announcement marks another milestone in the step towards creating a wallet-less world. NFC-enabled mobile payment interest has certainly been on the rise, and a recent survey from Ovum Research indicates that 33% of 15,000 respondents view mobile payment functionality as essential. Meanwhile, 59% of respondents stated the security of mobile as their highest concern, which makes it crucial that CaixaBank has ensured industry-wide security standards have been upheld with the wristband.

As reported by Banking Technology recently, the annual transaction value of online, mobile and contactless payment will nearly double to $4.7 trillion over the next four years. Initiatives such as this, and the forthcoming Apple Pay service, will be a key enabler in developing the mobile payments ecosystem.