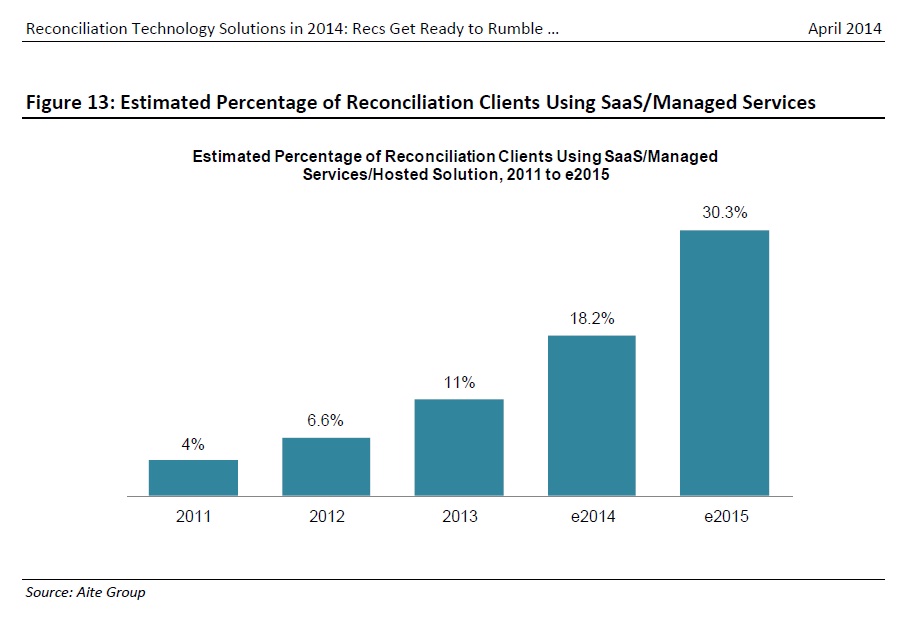 Aite Group: reconciliation is changing rapidly as both spend and outsourcing levels increase

Global regulatory pressure and the shift to real-time processing are causing banks and major financial institutions to rethink how they handle reconciliation, according to a new report by financial research house Aite.

The paper, Reconciliation Technology Solutions in 2014, suggests that continued emphasis on driving down internal costs at major global financial institutions since 2008 has led to a migration away from in-house deployment of reconciliation technology toward Software as a Service or hosted solutions. The percentage of reconciliation technology customers using hosted solutions increased from 4% in 2011 to 11% in 2013, and Aite Group expects it to reach 30% by the end of 2015. But Aite also warns that this trend may result in a conflict between operations teams and the advocates of outsourcing in the not too distant future.

The research also points out that firms should not expect to be able to simply outsource business problems. For example, opting for a fully hosted or managed service will not eliminate underlying problems in the business itself. Aite suggests that service level agreements should be combined with careful metrics to ensure that an agreement achieves success.

Desirable aspects of a reconciliation platform identified by market participants include:

Problem areas identified by market participants include the time needed to onboard new clients and the limits of flexibility in the existing solutions. In response to increased demand, new market entrants have begun providing niche solutions for reconciliation.

“New technology developments and increased demand for reconciliation support resulting from regulatory requirements, combined with downward pressure on operational costs, have compelled firms to explore a broader range of technology solutions,” read the report. “Many firms have therefore begun to assess the wider universe of options in a bid to bring down ongoing expenditure, which in turn has inspired new product launches and the addition of different deployment options from incumbent household names.”

In total, the research estimates that global reconciliation spending will reach $1.13 billion by 2015. The need to invest in technology in this sector is driven by a number of factors including cost reduction, a push to centralise, increased market competition and business pressure to diversify into other asset classes. It is also driven by pressure to tackle fraud and market abuse, as well as by changing market infrastructure.

Rather than being exclusively applied to reconciling cash accounts, there is rising demand for reconciliation in other areas such as derivatives. The reconciliation industry is also growing because the number of criteria that clients expect the technology to meet is increasing. Workflow support is the most important demand, according to Aite, while flexibility has also become increasingly important due to the desire to extend reconciliation process support to more complex data sets.

Differing paths of global regulation have produced different effects on global reconciliation. The percentage of reconciliation clients has increased in Europe from 44% in 2011 to 45% in 2013, while it has fallen in North America from 37% in 2011 to 30% in 2013. The main reason is that Europe has regulation directly targeted at the buy-side, whereas the North American markets have seen comparatively less direct regulation, according to Aite. The report anticipates more growth in reconciliations in Europe in 2014 and 2015 as regulations such as EMIR continue to come into force.