Raincoats, taxis and the future of banking 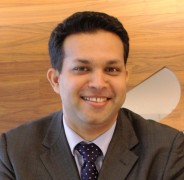 What do taxis, the weather, mobile wallets and raincoats have in common? They are all potential variables in determining a person’s daily spend – and they provide a great opportunity for banks to use data to save customers money, according to Aman Narain, global head of digital banking Singapore at Standard Chartered.

Narain is an enthusiastic early-adopter of every mobile financial technology under the sun. Having joined the bank in 1999, he has worked in investor relations, strategy, corporate development and technology and operations, and has a keen eye for some of the latest trends – including wearable technologies and the ‘internet of things’. However, he is also a vocal critic of many of the solutions out there today.

While tools such as the personal financial management site Mint have been around for many years, most solutions still take too much manual work for the consumer to get the benefit.

“The just give you insight, but they don’t let you take any action,” he said. “A really useful PFM system would interpret the data and turn it into a recommendation. For example, if a PFM tool can tell the user that she tends to spend more on cabs when it’s raining, and can also get in touch with the weather forecast and predict that it’s going to rain today, then it can remind her to take her raincoat and umbrella.”

Google has already started to explore this idea with its Google Now app, which shows users a series of ‘helpful cards’ with information about their day, without being prompted. For example, it will remind a user about their next meeting, give live flight status and traffic updates, show the weather for the coming day, calculate journey times from one place to another, display train or bus times, and display news and sports.

Much of the technological potential for financial services rests upon mobile devices. This holds true both in emerging markets such as Africa, India and Pakistan, as well as in Asia’s advanced markets such as Hong Kong and Singapore. In the former, the potential is mostly about financial inclusion and banking the unbanked. In the latter, the opportunity is the shift towards a cashless society, which should in theory provide more insight into personal finances, as well as improved transparency, which contributes to better governance and better management of tax revenues. “The growth of mobile payment services is good for all – it benefits everybody in society, not just the interests of the banks,” said Narain.

However, he added that the majority of mobile wallet platforms that exist today are akin to vitamin supplements. “You know it’s probably good for you. You know you should probably take it. But only a minority do, because it’s a nice-to-have, not a necessity. The payments world is full of people selling vitamins.”

What the industry arguably needs, he says, is the equivalent of painkillers – products that people will grasp immediately because they need them to solve an urgent problem. “Telling me that you can wave your phone over a reader and pay for something is not going to impress me,” he said. “I can just take out my card or cash and pay equally well. As an industry, we need to beware that we are not skating to where the hockey puck is. We need to skate to where it will be.”

Platforms such as the Isis mobile wallet which launched in the US in November, are likely to come up against bank resistance because they are based on the premise of a group of telecoms firms grabbing market share rather than cross-industry collaboration, he added. Some Far Eastern countries such as Japan have achieved success with mobile payments as early as the year 2000 – NTT DoCoMo, for example – but this was partly because a stable standard was established across the nation with the help of government and the regulator.

The implication is that banks and regulators need to work together more closely to ensure that mobile Standard Chartered is currently working with local regulators in Myanmar (Burma) to build up the country’s payments infrastrucutre. The bank has also maintained a close relationship with the Central Bank of Ghana, where Standard Chartered is supporting the launch of the Samsung Galaxy Grand 2 smartphone this month.

“There is a useful role for standardisation and regulation in this space,” he said. “Standards help to protect the consumer, and they help to ensure everyone is on a level playing field. Commerce takes off once there is a widely accepted standard – the US rail network in the 19th century is a great example. There were three track gauges. Once the network was standardised by Abraham Lincoln, goods could be shipped from one side of the States to the other. It was decisive. Payments is just the same.”

Location data can provide a useful tool to consumers looking for a better deal. For example, instead of buying a bag for a family member in one store, a shopper may use a mobile device to find where the same or similar items are being sold at a better price. However, inevitably the technology raises concerns about consumer privacy. The NSA phone hacking scandal has only heightened the perception among many that their personal data is not safe.

According to Narain, banks are in a strong position to improve their reputation by acting as guardians of consumer data – a role that they can be trusted with to a greater degree than other firms such as telcos or internet companies, he claims, which sometimes soak up customer data without user consent, giving nothing back to the consumer in the form of compensation.

“No bank will ever sell your data,” he said. “In fact most banks have data about some of the most important, personal things in your life such as a mortgage or a house, but they don’t use it. We know that data can be dangerous, and that it’s wrong to use data without the customer knowing about it. That contrasts with companies like Facebook. That’s one of the reasons we exist – to keep your data confidential.”

To keep data confidential requires security. Standard Chartered is currently rolling out IP monitoring in Hong Kong, which enables the bank to know where a consumer is logging in from. The system has a broadly similar aspect to Facebook’s remote access system, in which if you are logging in from a new country for the first time, Facebook knows about it and will ask you security questions.

The bank uses a US-based content delivery network called Akamai, which has servers that host data such as mirror copies of files in locations around the world. The idea is that instead of going to a data centre which may be based in Hong Kong, when the bank is trying to set up a branch in Zimbabwe, the information will be delivered faster via the cloud network.