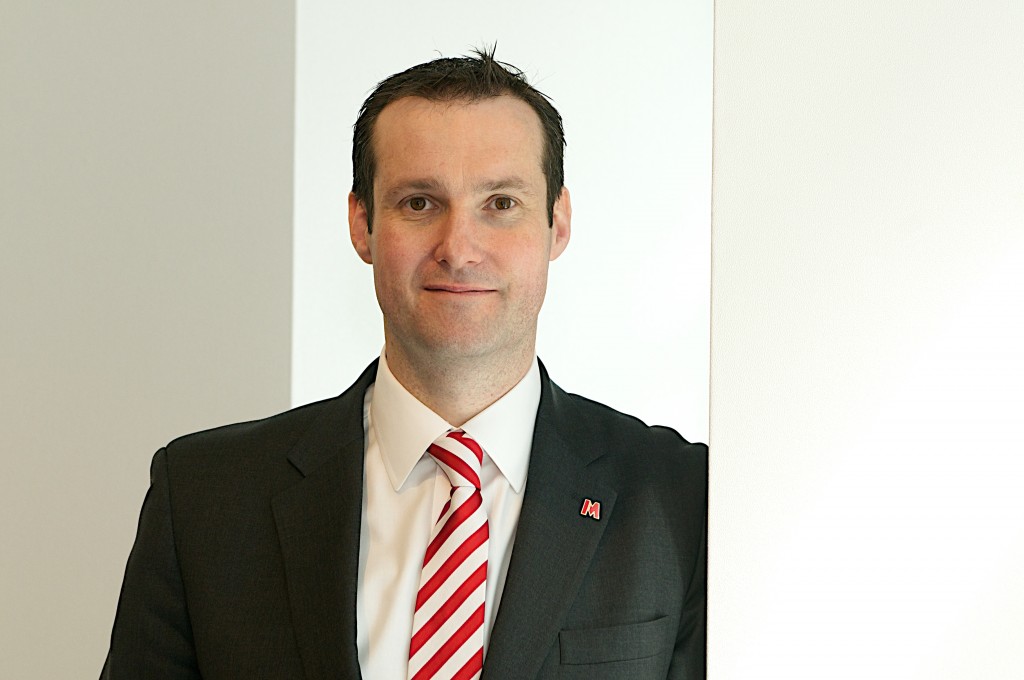 At the opening of a new branch in London, Craig Donaldson, chief executive at Metro Bank, talked to Banking Technology about a cultural shift in the retail banking sector.

Staff at Metro Bank don’t have sales targets – instead, they are incentivised to enhance the customer experience, said Donaldson. Metro, which just opened a new branch at Cheapside in the heart of London, is hoping this approach will pay off as it continues its campaign to win over the UK high street.

“On their first day at Metro, all our staff learn about attitudes and values,” he told Banking Technology. “They are chosen for their friendly nature and talent with customers. They don’t focus on selling. They focus on being attentive to what the customer wants. Creating a friendly and dynamic culture is so important. There’s a real atmosphere here – these people [Metro staff] are our lifeblood.”

At the new branch on Cheapside, a reggae band played music at the entrance, while customers were greeted by smiling young staff and welcomed in for cups of tea and popcorn. The age of the staff was noticeable – they were virtually all under 30. At 10.30AM, there were huge numbers of staff mixing with performers on stilts and in bright costumes. But it was difficult to determine how many new customers were present.

Set up in 2010, Metro Bank was the first new bank in the UK for 150 years. Founded by successful US businessman Vernon Hill, the bank is based on many of the same principles as his Commerce Bank in the US, where Hill made his name. These include longer opening hours, including evenings and weekends, dog-friendly stores with free dog biscuits, and above all, an emphasis on customer care. All new employees learn the acronym ‘AMAZE’, which stands for Attend to every detail, Make every wrong right, Ask if you don’t know, Zest is contagious – share it, and Exceed expectations.

“Customer service is the differentiator for us,” said Donaldson. “If you make the customer happy and give them a good experience, they’re much more likely to stick around. There’s no point selling to a customer if you’re not going to give them a good service. We are focusing on the Southeast for now because I want to make sure we are not promising something which we can’t be sure to deliver. Every person at Metro Bank is part of a revolution, and you can see that when you look at the staff present here today.”

These are lofty goals that seem difficult to maintain consistently, but the bank has a programme that is designed to support them. Firstly, the bank has each branch visited by undercover agents posing as customers each week, who check to see that the bank’s staff are maintaining high standards of customer care. Second, each member of staff is reviewed twice a month based on how closely they’ve lived up to the bank’s ideals. If there is a problem, that individual will be sent for additional training, according to Donaldson.

One of the key elements for Metro Bank’s strategy is technology. It’s normal for senior banking executives to talk of ‘channel agnostic’ retail banking, meaning a consistent experience across branches, internet and mobile. But Metro is keen to emphasise its mass investment in the latest technology, including tablet devices on every desk for staff and customers to use. The firm has rolled out Microsoft Windows 8 to all its systems, effectively throwing away its older technology. The bank has just relaunched its website and is also planning to roll out its new mobile banking app early next year. The app is currently in stage three of testing, and is due to be released to friends and family imminently. 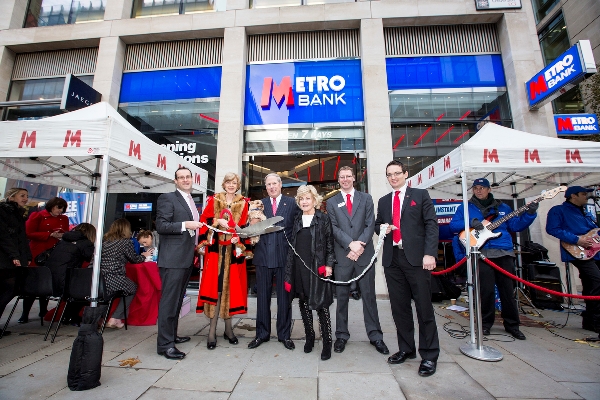 A live band greeted customers at the Metro branch on Cheapside

Metro Bank is also expected to be one of the main beneficiaries from the UK Payments Council’s new seven-day account switching service, which launched in September. The service is intended to boost competition in UK retail banking by making it easier for customers to switch their bank. While Metro has yet to release detailed figures for how many customers it has gained, Donaldson referred to a recent statement from Nationwide that claimed the building society was signing up 50 new customer accounts for every branch per month. Metro Bank, he claimed, was doing eight times better – a claim that if true would yield about 8,800 new customers across the brand’s 22 branches each month.

At such a rate, it would take a long time to convert the majority of the UK’s estimated 46 million current account holders to Metro Bank. A conversion rate of 0.02% per month would mean 5,000 months until Metro achieved 100% market share – a period of 417 years. However, Metro plans to expand its branch network nearly tenfold from 22 to 200 by 2020, so if current trends were to be replicated across every branch, Metro could certainly win a respectable share.

Away from the official chat, it appears that many of the staff present at the opening of the new store were volunteers from all over the business that had chosen to be there. “I love working here,” one of them told Banking Technology. “You feel you’re making a difference. Look around at the people here – they are smiling. It feels exciting to be part of something that’s growing.” Another added “I’m happy to be here. I didn’t have a background in banking, but I was chosen for my bubbly personality, and that inspires me,” she said.

If I hear that disruption is the new normal one more time… "“Where do I begin?” If you have ever asked me, you kno… twitter.com/i/web/status/1…

The @AFME_EU is in danger of “mixing the issues” of data, technology, and regulation as it calls for focus from the… twitter.com/i/web/status/1…