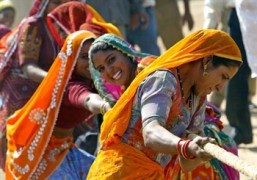 The new bank expects to open 25 branches by the end of next March next year. Bharatiya Mahila Bank has posts for 115 staff, the majority of which will go to females.

The bank has already been proposed in the government’s Union Budget, and is now awaiting the final permission from the Election Commission of India before it can launch. The Reserve Bank of India gave its approval for the new Bharatiya Mahila Bank in June. The bank is expected to be up and running in November, though the exact date remains uncertain partly because the Commission is currently handling assembly elections in five states, including Delhi.

Plans to increase financial inclusion in India are an important part of economic policy. The population of India is 1.2 billion according to figures provided by the World Bank, while the Bank of India estimates that 41% of the overall population is unbanked, rising to 61% in rural areas. Part of the appeal of an all-women bank is that Indian women may feel more comfortable dealing with an all-women bank branch, while in parts of India where the society is more conservative, women may also find they face less objections from society by visiting a female-only bank.