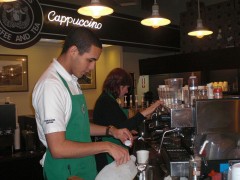 Mobile banking may be on the rise around the world but the bank branch is not dead, according to new research by IT firm GFT Technologies.

The study gathered responses from 894 individuals in Brazil, Germany, Spain, the UK and US and asked questions about how they used mobile banking, bank branches and how they imagined the future of banking.

The results showed stark differences between countries. The biggest users of mobile banking were in Spain and Brazil, where 63% and 62% respectively said they would use it. Germany was the most cautious about the new technology, where only 26% of respondents would use it. 58% of Germans responded ‘no’ to mobile banking, while only 11% of people in Spain thought the same.

The report concluded that banks should focus on improving their mobile banking strategy, and should ensure that their apps work on Apple iOS and Android phones, as well as Windows phones. It also suggested that there will be a need to support multiple customer service delivery channels – including bank branches – for some time to come.

“The bank branch is an important part of the banking service universe in the customer’s mind; that importance should not be underestimated in the rush to mobile,” warns the report. “Bank branches are not dead; customers still expect banks to have a physical presence to handle big-ticket transactions that they may not trust mobile banking apps to carry out at this time.”

Also worthy of note is the advice to ensure that bank branches meet the needs of the 21st century client, which means providing an interactive experience that is “as much about entertainment as it is about banking”. The tools to make that a reality consist of widescreen TVs, interactive touch-screen displays, availability of iPads and other interactive smart devices. The idea is that most simple teller transactions are being automated, while the branch itself will then evolve into more of a ‘financial advice centre’ for handling more complex interactions.

Some banks have already taken this advice to heart. ING Direct’s “banking café” concept in San Francisco in the US is a good example. According to GFT, the bank added physical locations to its original online- and phone-only banking services. These are cafés where every staff member is trained to make lattes, answer questions about current accounts and mortgages, and work the call centre on the top floor. Instead of a teller’s window, there’s a bar that offers coffee, pastries, sandwiches and salads. While there is an ATM on site, staff cannot take or dispense cash for banking purposes, but they will help customers open an account. ING has estimated that opening a café in an area typically leads to a 10% increase in the number of customers opening an account with the bank.

The document added that customers are more comfortable talking directly with humans for high-volume and long-term investment strategies such as credits or buying a house. As a result, it recommends that banks may wish to consider segmenting those customers not requiring advisory or other branch-based services into a mobile-only environment, enabling them to reduce but not eliminate branches.

“Transactions via mobile devices are significantly cheaper than in-branch transactions and even a little cheaper than online transactions, but they don’t provide the level of personal interaction available in a branch banking environment; mobile and online environments as a whole are less conducive to personal relationship development between banks and their clients, even when video conferencing is available,” notes the report. “Many banking customers – including younger customers – prefer to discuss personal financial and investment decisions face to face, as such interactions introduce a level of customer care that is simply not possible via electronic means.”