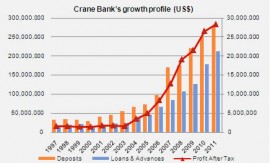 Uganda’s Crane Bank has chosen a core banking system from Temenos, together with various add-on systems, to support the bank’s Uganda head office as well as its expansion into neighbouring Rwanda.

Established in 1995, Crane Bank is based in Kampala, Uganda and has a network of 33 branches and 600 staff around the country. The bank is currently planning expansion into Rwanda, Democratic Republic of the Congo and South Sudan, with a target of achieving 50 branches by 2015.

The reasons cited by the bank for its choice were the broad functions of Temenos T24, which would allow it to be used across the banks treasury, corporate, retail, risk and lending businesses. The platform will also be expected to support Crane’s channel strategy, which involves launching mobile products to reach new customers in new markets.

The security of the platform will include biometrics, both for internal employees and for customers visiting a branch or ATM. In total, there are 90 Africa-based banks running Temenos software, according to the vendor, including Commercial Bank of Africa and Kenya Commercial Bank.

“We chose Temenos due to its global leadership, unparalleled deployment experience and installed base in Africa,” said AR Kalan, managing director at Crane Bank. “It also offers unrivalled functionality over a broad solution set, including core banking, mobile, AML, biometrics, business intelligence and risk, as well as its seamless integration capability. Temenos will provide us with a solid platform to manage our growth efficiently, with the best risk management tools and business intelligence. The platform will help us quickly and cost-effectively deliver new products and services as we grow and serve our customers both in Uganda and regionally.”

Sub-Saharan Africa has seen several product launches in recent months, including a new mobile payments deal between telecoms firm Orange and Visa in Botswana, as well as a Western Union mobile money transfer service in Nigeria, both announced in August. Meanwhile earlier in October, Tanzania’s CRDB Bank migrated its Burundi subsidiary to software provider CR2’s BankWorld platform, in a bid to bring self-service banking to customers across the East African country.