The start of 2023 has been interesting for the climate change agenda. 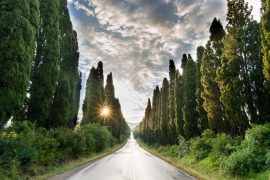 The intersection between finance and the environment is crucial

Europe has had a record-breakingly warm winter, and California, due to atmospheric rivers, is slowly disappearing under water as it gets inundated with record-breaking rain.

As I have spent time looking at climate change, I have concluded that California is very much the canary in the mine. Swinging wildly between drought, fires, and now floods, California seems to be following the predicted pattern for climate change outcomes.

I first saw the term ‘atmospheric rivers’ in Kim Stanley Robinson’s cli-fi classic The Ministry for the Future. Based on scientific research, the book imagines a near future in which California suffers from catastrophic flooding. A worrying case of reality mirroring fiction.

With the canary singing, I wanted to reiterate that the intersection between finance and the environment is crucial. The finance community is responding to the challenge through active participation, raising awareness and, in some cases, becoming cheerleaders for the cause. But there is so much to be done.

2022 was when I went beyond theory and started looking at what this intersection means. I have been lucky enough to work on several exciting projects with finance companies looking at strategic consumer propositions. It has been fascinating to understand what people actually think about the topic and what they are prepared to do.

There appear to be massive differences across geographies. Globally, there seems to be awareness, but when it comes to adequately comprehending the broader issues and the best way to respond, there are marked differences.

The complexities of climate change mean that getting consumers to engage in meaningful action is tricky. Providing access to carbon data has enabled people to understand, at least superficially, the impact of their consumer behaviour. But this does not necessarily translate into long-term action.

There is a fundamental problem. For most, the change in consumer behaviour required means giving up things they value and enjoy. These are the same things that are actively being encouraged by commerce. From foods flown in from far-flung places to exotic holidays abroad, consumers everywhere are constantly bombarded by advertisements promoting the things that ultimately need to change.

So what to do?

Education is a huge priority. Banks are incredibly well placed to help support the effort. The global players are in a position where they can use their reach to help raise awareness and enlighten citizens about the part that they can play. The distillation of core messages that have global applicability is still needed to provide a springboard into education. I have learned that education needs to be much more regionally and nationally specific. If the banks are to play a role, they must resolve their position on the subject and be clear about what they stand for.

For example, HSBC recently pledged to stop investing in coal (excellent). But more recently, there was a report in The Times accusing it of providing a loan to an energy company in Germany that is bulldozing a village to expand a coal mine. The optics aren’t great, and it makes it more difficult for the bank to claim to be a champion for environmental causes credibly.

Finding ways of dealing with the complexity is crucial. In my experience, it is almost impossible to tackle everything all at the same time. Instead, communicating broad themes and allowing people to focus on those that resonate with them is a more effective strategy.

For example, I used the WWF carbon footprint calculator, which helped me understand that my most significant carbon issues lie in my family’s energy consumption, the food we eat, and travel. Rather than make a wholesale change across everything, I decided to focus on our energy consumption. I explained what I had discovered to my wife and co-opted her. We buy renewable electricity and have found ways to drastically reduce our consumption. We also purchased a hybrid car and doubled down on using public transport, cycling, and walking. Almost all of our car journeys are electric, powered by renewable energy. A considerable positive has been how much money we have ended up saving. Even with the increased energy costs in the UK, our bills have gone down. Next on the agenda is food: less meat and more local. Once we have that tackled, our next target will be travel.

Eventually, consumerism will have to be addressed. Achieving significant reductions in carbon emissions requires a systematic change in how products and services are produced and consumed.

How and when this will happen is anyone’s guess, as it requires a re-evaluation of global economics. However, consumers cannot be expected to make wholesale changes in behaviour if what they are being sold and how they are being marketed to does not change. One thing is clear, though. This cannot be achieved without governments, businesses, and citizens working together.