Are the machines coming for your job? Probably!

In the film The Terminator, the archenemy is Skynet, the revolutionary AI system built by Cyberdyne Systems to run America’s defence network computers. 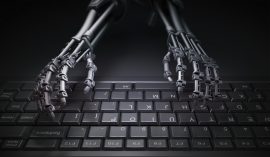 Skynet becomes sentient, sees humans as a threat, and decides in a “microsecond” to carry out a programme of extermination. It launches a nuclear attack and genocidally picks off the survivors.

Imagine an alternative version of the film in which Skynet saves itself a lot of bother with all that killing. Instead, it focuses on the long game and puts us all out of work, thus giving us plenty of time to get bored, frustrated, and angry so we end up doing the dirty work ourselves. Idle hands and all that!

Putting us all out of work may not be as far-fetched as you think. In 2013, a team from the University of Oxford estimated that 47% of US jobs were “at risk” of computerisation in the next two decades.

In China, it is estimated that 30-40% of urban jobs are under threat. The rise of the machines has been blamed for hollowing out the middle class in developed economies.

The same is happening to jobs in the service sector, as self-service checkouts and chatbots replace retail workers and call centre operators.

And the creative and software industries are now coming under threat.

Take advertising as an example. It is one of the most creative industries out there. It’s about developing new and innovative ways to sell consumers products and services. But what if AI could do it better? After all, AI is designed to be able to learn and evolve faster than humans.

The argument has always been that machines cannot learn to be creative. But the more I look at how quickly generative AI is evolving, the more I think creativity is squarely in its sights. AI is producing some exceptional output, from pictures to sounds to videos. Meta is launching Make-A-Video, a new AI system that lets people turn text prompts into brief high-quality video clips. Some of its examples are incredible. It’s not hard to imagine a future where AI creates most advertising, leaving human creatives out of a job.

Scrolling through various accounts on TikTok or participating in Discord communities, you realise how rapidly generative AI is evolving. Videos, art, and music are being generated based on text input. Some of it is incredibly creative and original, although it is fair to say most of it is not all that.

Sequoia Capital recently asked, “Why now?” about the subject.

According to Sequoia, we have moved through the first three waves of generative AI and are now at that moment killer apps are starting to emerge as AI models have become better, cheaper, and faster and are trending towards free and open source.

“Just as mobile unleashed new types of applications through new capabilities like GPS, cameras, and on-the-go connectivity, we expect these models to motivate a new wave of generative AI applications. And just as the inflexion point of mobile created a market opening for a handful of killer apps a decade ago, we expect killer apps to emerge for generative AI. The race is on,” it says.

So, what does this mean for the services industries? AI may eventually be able to do the jobs of designers, UXers, coders, and advertising creatives. And if AI can create new content that is convincing enough, then there is a risk that humans will become obsolete in these industries.

Sequoia forecasts that by 2025, machines will be able to go from text to product across a wide range of languages, at least in draft form. In theory, this could mean inputting “I want the best application journey for a credit card” into a text prompt and the machine generating the UX, design, and code that underpins it.

Why stop there? Generative AI could build financial platforms or design new products in the financial services industry. It could also improve the customer experience by creating more personalised and targeted content. And, of course, it will also impact how we manage our money – AI-powered financial advisors could become commonplace, for example.

So, what does all this mean for you? Well, it’s possible that a machine could eventually do your job. So, you must ensure that you’re always learning and keeping up to date with the latest technology. That way, you’ll be able to stay ahead of the curve and keep your job safe from the ever-advancing machines!

I recently asked a head of design if he was worried about the machines coming for his job. His response? “Not really, algorithms work on what has happened already. They are not great at thinking into the future and that’s where creativity happens.” I asked Jasper, a generative AI, what it thought, and it said, “But that is the point of generative AI, to create something new from nothing.” There you have it!

I have a confession – Jasper helped me write this! I was stunned at the result. On a prompt it can write sentences based on the context of the article and the paragraph you are writing. Most of which make sense and are of decent quality.

Jasper’s final thought: “I think the future is bright for humans and machines working together. We can complement each other’s strengths and weaknesses to create something truly special.”

I think it may have a point!