HSBC has announced it will be closing down 114 bank branches across the UK from April 2023, citing customer migration from physical to digital banking. 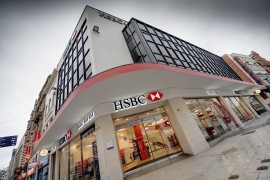 HSBC to close 114 bank branches across the UK

The banking giant states that over the past five years, use of its branch network by regular customers has fallen by 65%, with footfall in 74% of the closing branches falling by “at least 50%”.

“The decline in branch use has accelerated so much since the Covid-19 pandemic that some of the branches closing are now serving fewer than 250 customers a week,” HSBC says.

The bank claims that nine in ten transactions are now carried out digitally, while usage of its mobile banking app has nearly tripled since 2017. It adds that almost all personal loans (99%) and credit cards (98%) are now being issued digitally and cheque usage has also fallen.

“People are changing the way they bank and footfall in many branches is at an all-time low, with no signs of it returning,” says Jackie Uhi, HSBC UK’s managing director of UK distribution.

“The decision to close a branch is never easy or taken lightly, especially if we are the last branch in an area, so we’ve invested heavily in our ‘post-closure’ strategy,” Uhi adds.

As part of its branch network review for the new year, HSBC says it plans to expand the functionality of its digital banking offering and invest “tens of millions of pounds” in updating and improving its remaining branch network.

To support customers who will be affected by the branch closures, HSBC says it will provide 1,500 free Samsung tablet devices to those who are unable to afford or have no access to equipment to help with digital banking and one-on-one coaching for select customers to help them transition to digital banking.