At Sibos 2022, Swift’s The Future of Money saw “tribal leaders” set out their vision for what finance and money will be like in 2040. 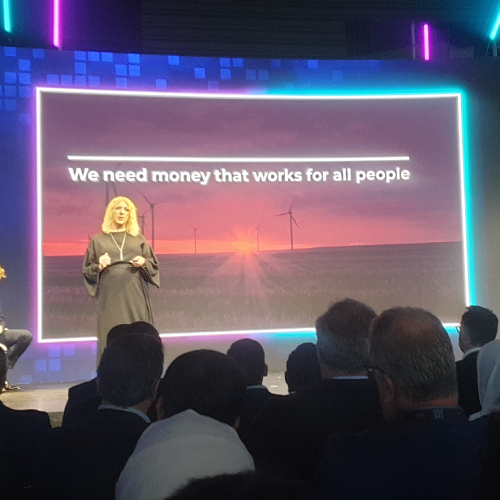 Money for the end of the world as we know it

She outlined the reasons why money – which Moyle readily admits can only solve so much – must get into the hands of more people, reeling off statistics such as how 10% of the world’s population now own 76% of the world’s wealth and how the world’s ten richest men have doubled their wealth since the pandemic. “That’s just a snapshot of the disparity in the global distribution of wealth,” Moyle says.

In short, global inequality has worsened, accelerated by the pandemic. Throw in inflation, recession and an energy crunch and the need for the redistribution of wealth has never been more essential.

To underscore her point, Moyle quotes Henry Ford, who said, “It’s well enough that the people of the nation do not understand our banking and monetary system, for if they did, I believe there would be a revolution before tomorrow morning.”

Although fintech and payments alone will not address the problems of the world – from climate to war – “money still matters” and the future of money needs to be transparent, deliverable at lower costs, and crucially, “it needs to work for all people”, Moyle says.

As a parent of four children, “perhaps not the most climate friendly thing”, Moyle says, she believes a lot of the education around building a more equitable society comes from the younger generations.

Crypto and blockchain, for all their strengths, do not address the structures of power as they are now, Moyle says. But “we are seeing the start of a shift to a subscription economy”, one that prioritises access over ownership, leveraged by nascent and emerging technologies such as artificial intelligence (AI) and blockchain. With the ongoing distribution and penetration of, if not a smartphone, at least a feature phone, “I think some of the technologies I referred to will make that access easier”, Moyle adds.

Billed as “automatic for the people”, Moyle outlined her vision – money will be automatic; set it and forget it, frictionless checkout, no penalty for inertia.

In the future, we’ll all have our own “Skyscanner for money” working for us, Moyle believes, scanning for the best deals, applications and solutions on offer and allowing a greater proportion of the world’s citizens to maximise their income and make the most of their money.

This approach will “incorporate our own personal parameters, ideals and goals”, whether that is reducing our carbon footprint or supporting investment decisions or scaling back services, or cancelling them entirely, if not needed, Moyle believes.

While Moyle’s “Skyscanner for money” will not create income or wealth itself – “those challenges are beyond the power of money alone” – it can certainly help individuals and businesses maximise what they have. “My vision is for money that works not just for the wealthiest of the world’s citizens, but for all of us,” Moyle adds.

“The solution to poverty, to economic development, sits well outside the remit of what I believe money can achieve. Certain monopolies have a power and policies sit with the state. But I think allowing people the opportunity to do more with their money, it’s a small step, it’s not a revolution.”