Sibos 2022: No bank is an island – joining up digital currencies

At Sibos 2022, experts from Bank of America, HSBC, Accenture and the European Central Bank (ECB) got together to hash out what banks, central banks and payment networks must do to ensure interoperability between existing payments infrastructure and the new ways to pay, in particular, central bank digital currencies (CBDC). 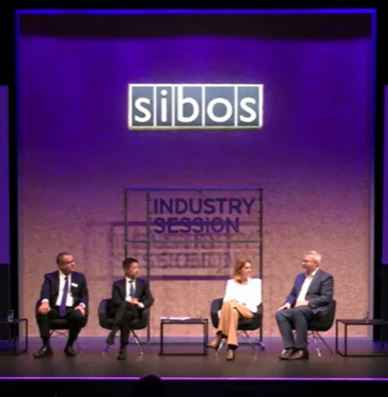 On stage for “Connecting digital islands” were David Kretz, managing director and head of financial institution payments and market infrastructure in the global transaction services business at Bank of America; Lewis Sun, head of domestic and emerging payments for global liquidity and cash management at HSBC; Accentures’ senior managing director David Treat; and Evelien Witlox, programme manager for the Digital Euro program at the ECB.

Accenture’s David Treat began by saying there’s a “Cambrian explosion” of global cooperation in this space and detailed how open-source software firm Linux is set to launch the open wallet foundation, looking at the experience layer for a digital currency, “and the woeful inadequacy of all the current wallet infrastructure”.

Banks and central banks can learn from such an open-source approach, Treat says, with open standards key to the testing and evaluation of any design characteristics of a mooted CBDC.

“We’re testing across the globe, with lots of parties testing, not just the obvious ones, and really challenging a lot of the orthodoxies that we’ve held on to for a very long time,” Treat adds.

The ECB’s Witlox says the central bank has already done “a lot of studying” when it comes to its own digital Euro project, which is a retail CBDC and roughly halfway through the design process. There are many factors to consider, Witlox says, including issues around privacy, form factors and distribution models.

In fact, the ECB recently published the first set of final distinctions around privacy. The central bank is also looking at what tools are needed to control the amount in circulation, baking financial stability into the design. Additionally, the ECB is considering the digital euro both online and offline, “in parallel”, and are therefore looking at a settlement model.

“We have been discussing the role of intermediaries and also the distribution model. Other important decisions are still to come in terms of finalising our thinking on cross border usage, and also who will have access to digital euro holdings,” Witlox concludes.

A problem defined is a problem solved

Bank of America’s David Kretz spoke on the importance of interoperability, not just across borders but between payment systems old and new.

“People define interoperability in a variety of ways, but it basically means things that work together in a seamless way,” Kretz says. “To keep things really foundational, as we know, payments don’t work in an interoperable manner. A wire payment starts as a wire and terminates as a wire. The wire doesn’t morph into an ACH [automated clearing house].”

But what we really mean by interoperability is the store of value, Kretz believes. Bank accounts store value, or notes in a wallet store value. But when it comes to buying a stablecoin or using a CBDC, things get messy. Migrating that “seamlessness” enjoyed by traditional stores of value to newer forms is the goal. “The most fundamental thing is how do these stores of value go from one place to another. Interoperability in this context has to do with how value is exchanged,” Kretz adds.

HSBC’s Lewis Sun says interoperability comes down to friction, or the lack thereof. “There are different ways to try a CBDC; interoperability could be a payment on one system that can be passed on to another system without losing any critical information, all happening at relatively acceptable speeds,” Sun says. “I’m not even using the word real time because that’s way too ideal.”

One rule for thee

Sun says the CBDC experiments conducted by HSBC have all been conducted “in a relatively controlled environment, with a lot of parameters pre-defined by the system”. The experiments had the luxury of following one set of rules. What happens when you have different parties with different rules working together?

Different central banks working together may struggle to come up with governance and risk control measures because they might have different requirements, for example. Banks may have to fully embrace decentralisation in the process. “A central bank giving up the authority over an interest policy is becoming truly decentralised,” Sun says.

But “eventually the system will decide what set of rules a transaction needs to follow and what checkpoints it requires,” Sun concludes.

Treat says that part of the complexity around CBDCs is that even though 105 central banks are now discussing CBDCs, all are at a different stage at the design phase. “All the jurisdictions are in different places,” Treat says, “while at the same time we’re discussing how they could be interoperable with each other. But if you do it in parallel, one can feed the other.”