Sibos 2022: CBDCs could be the next big leap in the evolution of money 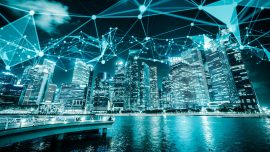 There are currently 105 countries and jurisdictions that are exploring CBDCs

Over 100 jurisdictions, international financial institutions and inter-governmental bodies have entered into various proof-of-concepts (PoC) and pilots of CBDC to explore merits and considerations of this new form of money.

What is a CBDC?

A CBDC is generally defined as a digital format of central bank money, most commonly represented in a tokenised version underpinned by distributed ledger technology (DLT). Served as a legal tender, it is issued and regulated by the central bank.

There are two types of CBDCs. The first are retail CBDCs, intended to be used by consumers, businesses and corporations in day-to-day transactions, similar to how current e-wallets, credit cards or cash transactions are used.

The second are wholesale CBDCs, which are intended to be used only for financial institutions and are not accessible to consumers, businesses or corporates. The use case of wholesale CBDCs usually revolves around improving institutional settlement speed and reducing counterparty risks.

What are the motivations to explore CBDCs?

Many central banks are examining CBDCs. Some are in the early stages, but progress is accelerating. A 2021 BIS survey found that 86% are conducting research, 60% have moved to experiments and 14% are now conducting pilots.

Informed through discussions with central banks, many see four key motivations to explore CBDCs: protecting financial stability, financial inclusion, crime prevention and improving the domestic and cross-border payment experience. Initial analysis of CBDCs suggests that if they are designed prudently, they can potentially offer more resilience, more safety, greater availability and lower costs than private forms of digital money. They are in stark contrast to some crypto assets that are unregulated.

As of today, there are now 105 countries and jurisdictions that are exploring CBDCs. Among them, 50 countries are in an advanced phase of digital currency exploration (development, pilot or launch). For G20 countries, 19 are exploring a CBDC, with 16 already in the development or pilot stage.

With across-the-board global testing and some implementation of CBDCs, one could argue that their use might eventually become widespread. However, there are three key considerations that might help propel CBDCs into achieving their full potential.

Financial market stability – Central banks should commit to minimising the impact of CBDCs on financial intermediation and credit provision. By entrusting financial intermediaries with distributing CBDCs, central banks can continue to benefit from their experience in areas such as onboarding of consumers and anti-money laundering checks. Central banks can also ease liquidity conditions, for instance by providing abundant and favourable central bank funding, if required, to limit strains from possible changes in the composition of bank funding.

Interoperability of CBDCs – A key issue, especially observed through projects focusing on exploring CBDC-based cross-border settlement schemes, is that today most central banks only provide accounts to local banks, preventing CBDCs being interoperable. Without each country changing that policy and providing direct access to foreign payment providers, the cross-border benefits of CBDCs seem hard to achieve. We support interoperability between CBDCs to preserve and support global markets. Depending on the preference of central banks, this can sometimes take the form of bilateral arrangements, a hub and spoke model or single cross-border platforms.

Alignment of policy developments – Beyond the monetary and interoperability design aspects of CBDCs, policy developments are also essential, including developing new legal frameworks, new regulations and new case laws. Privacy in particular has been cited by many central bankers as one key consideration.   Privacy and personal data protection policies need to be updated to address specific concerns that CBDCs may bring around data access. Transparency and public understanding of such policies and protection of the public are of paramount importance. Taken together, careful design and policy considerations will underpin trust in CBDCs.

CBDCs could be the next big leap in the evolution of money. Widespread digitisation across the economies has prompted a number of central banks to evaluate issuing a digital form of existing fiat money that can be used as legal tender.

While there are apparent advantages for implementing CBDCs, there is no universal case for CBDC adoption, thus the rationale and use cases would differ across countries. The studies are still at an initial stage and any adoption needs to be carefully assessed and evaluated as it could have profound implications for the banking system.

Mr Sun has performed in various roles in China and Hong Kong since he first joined HSBC in 2002 as a product manager in mainland China. He was appointed as head of GPS, HSBC China in February 2015, and in August 2017, he came to Hong Kong to take over as regional head of product management for the Asia Pacific region.

He holds a master’s degree in electronics engineering and an international MBA degree from Tsinghua University, as well as a certificate in international cash management from the Association of Corporate Treasurers in the UK.