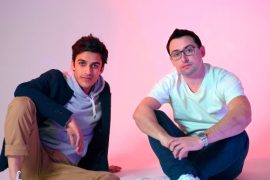 According to the start-up’s website, US expats Neeraj Baid and Patrick Kavanagh – early employees of trading platform Robinhood – set up Atlantic Money after wondering why “they were still being hit with £100s in fees for a service they believed was largely automated”.

Spotting a gap in the market, Atlantic Money will allow users to send up to £1 million for a flat fee of £3, at the live mid-market currency rate, with no FX margin.

Atlantic Money claims users can save up to 99% against providers such as PayPal, Wise and Western Union.

Using their app, which is currently open for signups, customers can send money from the UK in GBP into nine currencies including USD, EUR, AUD, CAD, SEK, NOK, DKK, PLN and CZK.

The fintech came out of stealth at the beginning of March and has already received investment from Amplo and Ribbit Capital, which led Atlantic Money’s $4.5 million seed funding round.

Co-founder Kavanagh says: “We’ve built Atlantic Money from the ground up and aim to be the logical default option for customers who send larger amounts of money overseas regularly.

“This market has evolved in the last decade but there’s still a long way to go, and even customers who have switched to platforms like Wise and PayPal are paying significant and unjustifiable fees.”

“This allows us to upend the traditional pricing models used by our competitors by passing on institutional pricing to our customers.”