Coinbase, the US-based cryptocurrency exchange, launched its initial public offering (IPO) on Nasdaq on Wednesday, hitting at valuation of $99.6 billion.

Shares debuted at $381, a 52.4% increase on the $250 reference price – the benchmark for performance when Coinbase stock started trading. Shares closed below $330, up a lesser 32%. 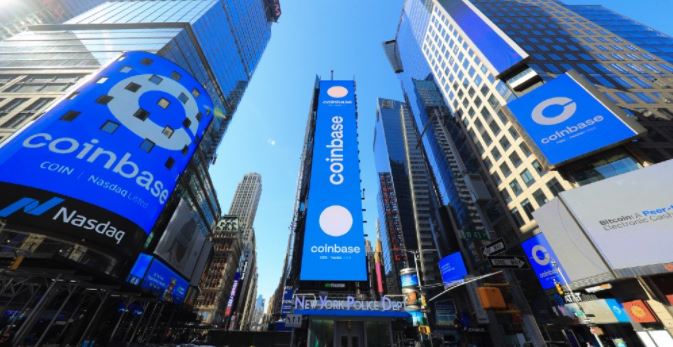 The firm listed its stock directly on Nasdaq. This meant employees and existing shareholders could sell their Coinbase shares immediately at the market-level price.

“The Coinbase IPO is potentially a watershed event for the crypto industry and will be something the Street will be laser focused on to gauge investor appetite,” Wedbush analyst Daniel Ives said in a note to investors, as reported by Sky News.

It has since acquired more than 56 million users, up from 43 million at the end of 2020, and 32 million the year before that.

The firm predominantly makes money by charging transaction fees involving the purchase of Bitcoin or Ethereum – both of which have enjoyed record growth in value over the last year.

At the end of March, Coinbase claimed to hold some $223 billion in users’ assets. In the first three months of 2021, the firm also reported $1.8 billion in estimated revenue. That’s more than its total for all of 2020.

Its preliminary first quarter results also estimate that monthly transacting users climbed from 2.8 million in December, to 6.1 million in March.

A year of growth, and racism allegations

Coinbase employees now operate on a remote-first basis, meaning the firm is without an official physical headquarters.

Less than a month before Coinbase first announced its IPO in February, revelations of racist treatment to Black employees came to light.

The New York Times revealed the acts of racism that led to Black members of staff at the company leaving. It noted: “One by one, they left. Some quit. Others were fired. All were Black”.

“One Black employee said her manager suggested in front of colleagues that she was dealing drugs and carrying a gun, trading on racist stereotypes.”

According to the NYT, at least 11 Black employees informed Coinbase’s human resources department or their managers about racist or discriminatory treatment.

Read next: Coinbase files for IPO listing amidst racism scandal