I took my phone to the repair shop two weeks ago. Had I known how long it would take to get fixed, I might have borrowed another one temporarily.

The first day without it was terrible. I kept reaching for my phone and I didn’t know at the time, but I couldn’t check the football scores or weather. I worried about who was trying to get a hold of me or them wondering why I hadn’t messaged back immediately.

Many of the apps I used had data on the phone only. I didn’t have access to my contacts and couldn’t remember 99% of telephone numbers. By the end of the day I realised how dependant I was on my phone. Some of the apps I use are ONLY on my phone and some web apps required two-factor authentication using my phone.

I used my phone for so many things. How would I survive without it? The real question I feared to ask myself was whether I was addicted to my smartphone! I did not know until I researched this that there is a name for smartphone addiction: “nomophobia”.

In the UK over 95% of people over 16 have a smartphone (research from WeAreSocial) and spend over two and a half hours daily on it (Research from Findr), mine averaged closer to four hours. Our use of time spent on phones in the UK grew by 20% last year. 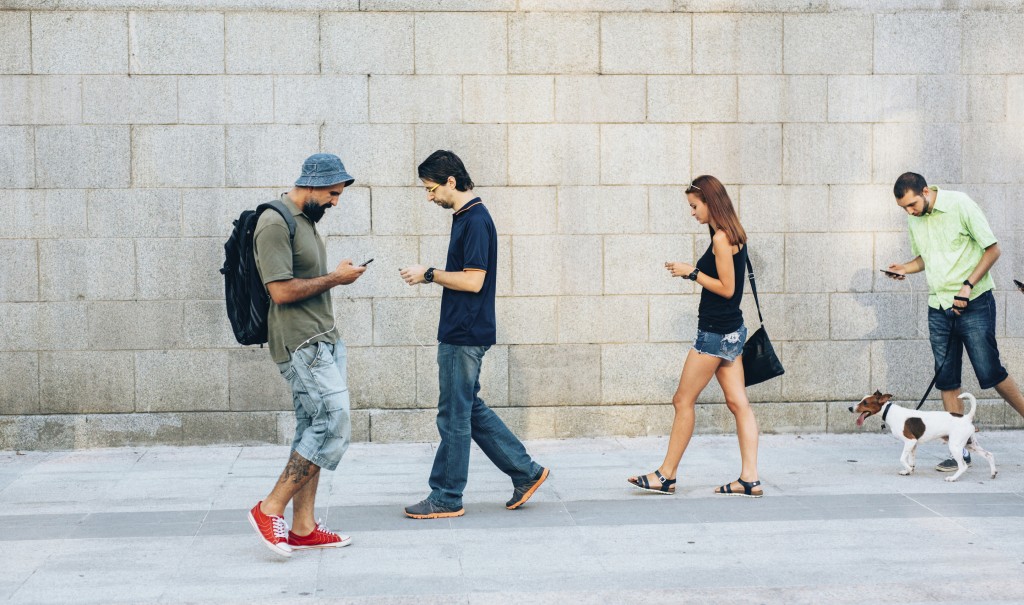 I used my phone for so many things. How would I survive without it?

Outside of Africa, smartphone penetration is well over 70% in most countries. About a 20% of our time on smartphones is spent on social media, with both social media and chat being the two most used apps on a smartphone. Our general use of the Internet in the UK averages at six hrs 26 minutes per day, exceeding time spent watching TV at four hours and one minute.

Research from Deloitte highlights that over 50% of 16-44-year-olds recognise they are using their phone too much. Science has proven that there is a reason for our addiction, each time we respond to an email, text message or notification a small amount of dopamine is released to our brains which encourages us to keep coming back. Very much like slot machines our addiction is fuelled by variable rewards – every now and then we get something interesting/useful. This is not accidental as a key principle for any app is to drive user engagement, they are designed to get users to keep coming back and spend time within the app.

Often addiction masks deeper underlaying issues like stress. Clearing our email and notifications feels good as we get our feed of dopamine, but really, we may be using the distraction to not have to deal with a difficult situation or task. Psychologists point to smartphones causing broader mental issues such as loneliness and depression. Apps that drive casual dating are blamed for their users’ ability to create deep meaningful relationships. For some it is now almost impossible to focus on a single task for more than one hour without picking up the phone. On average research highlights we look at our phones 85 times a day!

Being without a phone certainly re-opens your eyes to the world around you. How much TV is watched with the simultaneous use of a phone, how the majority of people in any queue is staring at a phone, and often conversations are halted with something “important” on the phone. It also highlights the need to ensure that users have alternative access. It’s frustrating that some apps like Clubhouse only support iPhone let alone are mobile only.

However as both Monzo and Starling identified they need to support web access from tablet/laptops too. I also found that some apps that provided web access still had a dependency for a smartphone to provide two-factor authentication.

Whilst a lot has been written and said about the risks of AI in the future, not enough is said about the risks and issues about smartphones and our growing dependency and often addiction to them. At the same time as we move to an ever more digital world we need to ensure that alternative channels are available not only for the minority that don’t have smartphones but also for those times when you just can’t use your own. I have written a lot about how to drive user engagement, but this must be done responsibly.

I’m not saying that smartphones are all bad, just that like most things that can be addictive and bad for you if used in excess, we need to be aware of the downsides too. It is amazing how quickly we can adapt. After two weeks I still do not have my phone and I am much more relaxed about when it may or may not come back. Perhaps we should all try a regular digital detox?