Santander’s profits down 35%, but Botín bets on vaccine for 2021

Santander, which endured its first ever loss in its 163-year history in the second quarter of 2020, has revealed pre-tax profits for the year dipped 35% to €9.6 billion.

But Ana Botín, Santander’s executive chairman, is confident the bank’s profit will rebound based on the roll out of COVID-19 vaccinations this year.

Other costs impacting Santander’s 35% pre-tax profit dip include writedowns. That is, the cost of reducing the value of its assets.

Another factor affecting its profits is the restructuring of its Spanish businesses in the final quarter of 2020.

Some 21% of its underlying profit came from North America, and an even larger 42% coming from South America. That’s compared to the remaining 37% it brings in from Europe. 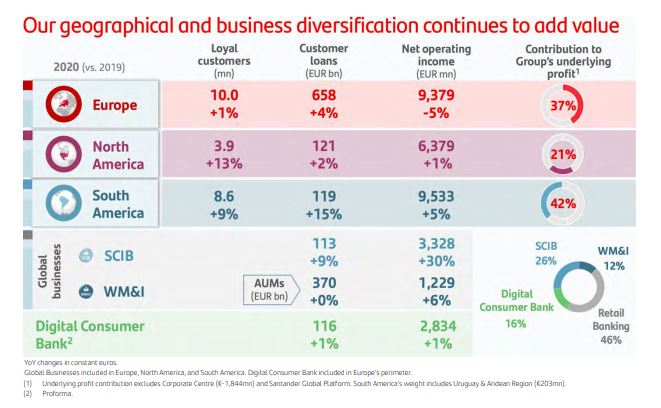 The bank’s underlying profit, its preferred measure of profitability, sat at €5.1 billion in 2020. But the bank predicts a rebound in profitability this year, which prompted Santander shares to climb almost 3%.

Betting on the vaccine

Upon the eve of the bank’s results, Botín made her stance clear on the importance of the vaccine in the banks recovery back to a pre-pandemic state of profitability.

“Vaccination is the most important economic policy for 2021,” she said on the eve of the bank’s 2020 results.

“We will not let down our guard, but I define my view as one of realistic optimism. A successful roll out of the vaccine will act as a strong catalyst for economic recovery.”

Botín went as far as to say mass vaccination programmes will likely prove more important for European economies than interventions by governments and central banks.

At time of writing, the total number of vaccine doses distributed to European Union and European Economic Area states sits at 11,878,821.

That excludes the UK, which aims to have 15 million people – those aged 70 and over, healthcare workers and people required to shield – by mid-February.

Botín’s bet on the vaccine is risky. According to a BBC report last week, the EU looks set to receive just a quarter of the 100 million AstraZeneca doses it had expected by the end of March, which puts millions of lives at risk.