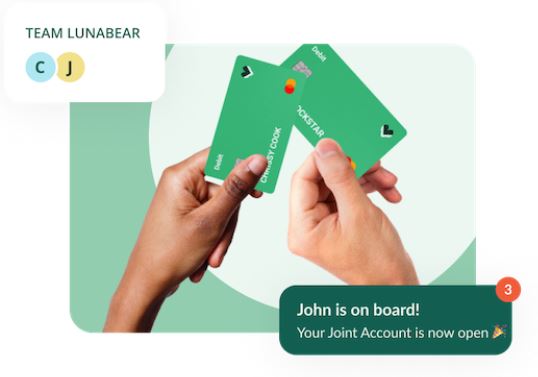 The round, co-led by Deciens Capital and Precursor, also attracted executives from Chime, Square, PayPal, Venmo, Google, Facebook and Weight Watchers. Some 57% of its investors are either women, or people of colour.

At present, the fintech offers its joint account through LendingClub Bank, insuring deposits up to $500,000.

“In some ways, we see ourselves as part of a replacement for Venmo,” co-founder Aditi Shekar tells TechCrunch.

In other words, Zeta is a digital layer of banking services designed to set on top of pre-existing bank accounts.

“There are a lot of fintechs that will go after the direct deposit,” says Shekar. “But we really thought about Zeta as the layer on top of existing accounts, so you don’t have to move everything over.”

Couples can therefore use the card to take over standing bills like rent or a mortgage.

As well as set mutual goals for holidays or large purchases. Customers simply deposit money into the account from their main bank provider.

Shekar’s long-term goal, alongside fellow co-founder Kevin Hopkins, is to create a an operational account for “any modern household”. This applies to couples, families, or housemates.

Currently, the start-up makes money on partial interchange fees, with some of this also going to couple’s primary banks. In the future, it intends to roll out tax and prenuptial agreement-related products.

It is also thinking about adding a feature to pre-empt the instance of a break-up, though it’s still unclear what the start-up would do with a couple’s funds in that scenario.

Read next: Hapi rolls out UK savings and investments app for parents