Suryadevara was named CFO of Stripe, the online payments start-up on 11 August. 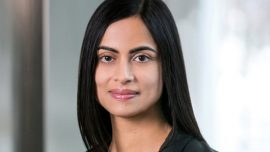 Hiring a big-name CFO is often seen as a precursor to an initial public offering (IPO) for a fast-growing private company such as Stripe, according to the Financial Times.

The paytech was valued at $36 billion earlier this year.

However, John Collison, president of Stripe, insisted that he had no “near-term” plans to take the company public.

“IPO considerations did not figure highly in our reasoning for this hire,” says Collison, who co-founded Stripe with his brother Patrick in 2010.

“We have no time-frame that we are working toward in terms of going public. It’s not a near-term thing on the cards for Stripe.”

The payments company has been building out its senior team in recent months.

Its recruitment of Suryadevara, comes after what Collison says was an 18-month search, follows last week’s hire of Mike Clayville, from Amazon’s Web Services unit, as chief revenue officer.

Earlier this year, the paytech hired a new general counsel, Trish Walsh, from Voya Financial, the US retirement plan provider.

Suryadevara was appointed General Motor’s CFO in 2018 at the age of 39, becoming the first female finance chief in the carmaker’s century-long history.

GM became one of only two businesses in the Fortune 500 with a female chief executive and finance boss.

GM chief executive Mary Barra says: “Dhivya has been a transformational leader in her tenure as CFO. She has helped the company strengthen our balance sheet, improve our cost structure, focus on cash generation and drive the right investments for our future. We wish her every success.”

Collison notes that, “things that might not at first sight seem very relevant to Stripe actually proved to be”. This includes GM’s large lending business and presence in emerging markets.

Suryadevara will be among about 400 new staffers to join Stripe so far this year, as it continued its expansion despite the uncertainty created by coronavirus.

Stripe’s overall payment volumes are growing at a faster rate than at the beginning of the year, says Collison. It comes as acceleration among customers such as Shopify, Zoom and Instacart outpaced slowdowns at the likes of Uber and Booking.com.

Hundreds of thousands of new businesses have signed up for Stripe since March, allowing it to hit its 2020 customer targets almost six months early.

Almost $10 billion in payments have been processed for those new customers, Stripe says. It claims to have total volumes running to hundreds of billions of dollars a year.

As the pandemic spread in April, Stripe raised an additional $600m on the same terms as a round of funding it had announced last September.

Stripe has also looked to make investments of its own during the pandemic, leading a $20m round of funding in the online payments start-up Fast and adding to its stake in the UK digital bank Monzo.

“Despite the natural tendency of businesses to retrench in periods like this, it’s actually really important to be able to continue expanding because the need for something like Stripe is even more pronounced,” Collison says.