Canada is set to get a new savings fintech, as Neo Financial prepares to for a 2020 launch. 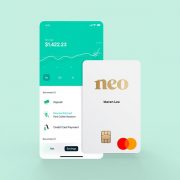 The firm, founded by two of the co-founders of food courier service SkipTheDishes, offers a no-annual-fee credit card and savings account while also giving Neo members access to “instant rewards” from partner brands.

The brand is a portfolio company under venture builder Harvest, set up to support start-ups in the Canadian Prairies region.

“Today, with just the push of a button, we can hail a ride, have hot food delivered or stream our favourite show on demand, yet, the innovations we see in these industries and around the world have failed to translate into everyday banking,” says Neo co-founder and CEO, Andrew Chau.

“This gap is an opportunity to re-imagine how spending and savings should be, and we’re building Neo from the ground-up using today’s technology to give Canadians the most rewarding experience.”

Neo has partnered with a as-yet unnamed Canadian bank to provide access to a savings account, and plans a launch “in the coming months” with Calgary as the first pilot market. From there it aims to roll-out across Canada later this year.

The firm claims that thousands of people have joined its wait-list and that hundreds of brands and local stores have signed up for its initial launch.

Royal Bank of Canada (RBC), one of the major Canadian banks that Neo is trying to disrupt, announced earlier this week its plans to create a new digital bank for the super affluent in the US.

CEO David McKay says RBC’s US presence is evolving beyond commercial lending and wealth management, going “a little down-market” from the wealthiest in the country to the “super-affluent” customers, with a “direct-to-consumer strategy” to arrive later.

Related: Challenger banks in Canada – who’s who and what’s their tech