JP Morgan is understood to be launching a range of savings and loan products under its Chase brand in the UK over the next few months, Sky News reports.

Due to hold an investor day this week, the bank – which is the world’s biggest lender by market capitalisation – will announce its growth strategy, but it is unsure whether the UK bank launch will be mentioned.

Currently in discussions with the country’s financial regulators according to Sky News sources, the bank is expected to launch later this year. With the UK having experienced a period of excessively low interest rates, the launch could spur a shake up in competition and prices among incumbent lenders. 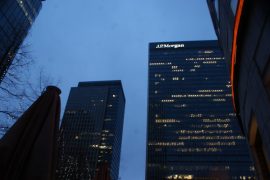 So far, JP Morgan’s consumer banking business has mainly operated in the US. Fellow US bank giant Goldman Sachs launched its retail consumer bank Marcus in the UK two years ago, but the current offering is smaller than what JP Morgan intends to launch.

Less than eight months after Marcus landed in the UK, the bank had attracted more than a quarter of a million British customers and more than $8 billion in UK deposits. The bank puts its early success down to a high interest rate offering of 1.5%, and its relation to the household Goldman name.

But in December, the Sunday Telegraph reported that Goldman was slowing its UK growth of Marcus to avoid hitting the $25 billion deposit threshold which would require it to ring-fence its retail banking intake from riskier investment activity – operations Goldman and JP Morgan specialise in.

JP Morgan’s plans to launch its own UK digital bank will be led by Clive Adamson, who is former head of supervision at the Financial Conduct Authority (FCA) and a non-executive director at JP Morgan Securities, the Financial Times reports.

The bank is likely to offer savings and current accounts, as well as a range of open banking services and loan products. It is not clear whether it will also tap the UK mortgage market.

Previous digital bank Finn, created by JP Morgan in 2018 for US consumers, was closed a year after its launch date. The industry speculated that Finn, which did not release official numbers, only had 47,000 customers when it closed.

The failed launch was put down to a mixture of lacking differentiation from the bank’s Chase mobile banking app,the roll-out of more branches in areas the bank was trying to tap through digital-only Finn, and the lack of an enticing offering such as Goldman’s Marcus rivalling interest rate of 2.25% in the US.

JP Morgan will be entering into a tough market for challengers in the UK. With N26’s announcement of its departure two weeks ago, which was justified by Brexit but speculated by many as a result of low customer acquisition, it’s clear that new digital banks need to discern themselves and understand new markets before executing their plans.

“Many retail banks globally are facing squeezed margins, increasingly competitive markets and operational costs that they cannot do anything about but while having to spend billions and billions to maintain them,” says 11:FS’ CEO David Brear on the news. “A greenfield challenger in this vein is their best way to do something about this quickly and avoid being the next victim of corporate evolutionary leaps in the way players of the past like Nokia or Kodak.”

JP Morgan’s entrance into the UK is likely going to target a bigger audience than obvious rivals such as Goldman’s Marcus, and comes as Brexit pushes many international banks to move their EU trading and lending operations out of the UK.

Read next: LendingClub becomes first fintech to buy a US regulated bank