Singapore’s biggest bank DBS has had to evacuate around 300 employees after it found one of them had fallen ill with the coronavirus.

Sent to work from home on Wednesday, all 300 evacuees were working on the same 43rd floor at the Marina Bay Financial Centre. The 62 year-old male employee tested positive for the virus on Tuesday.

“During this difficult time, the bank will be providing this employee and his family with every support and guidance,” DBS said in a statement. The bank is conducting a deep clean of all the building’s communal areas – such as lifts and toilets. 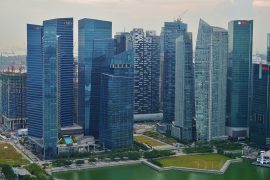 DBS sent its evacuated employees home with thermometers, masks, hand sanitiser and vitamin C. It has also set up a medical helpline for employees to call if they fear they may be infected, and has installed temperature screening on the other office floors.

Singapore has reported 58 cases of the new virus so far, which is one of the highest infected numbers outside China. According to its Ministry of Health, 15 of these have recovered and been discharged.

The country, which has a population of 5.7 million, has raised its ‘Disease Outbreak Response System Condition’ to orange last week which means the virus is becoming severe and spreading easily.

Fellow Singapore-based bank OCBC has taken similar measures, and is also helping customers restructure loans and secure a moratorium on principal repayments. Earlier this week, the Monetary Authority of Singapore (MAS) warned banks to expect an influx in the use of cash withdrawals and online services as a result of the virus.

The outbreak has also had a severe affect on global technology conference Mobile World Congress (MWC), which has now been cancelled after major technology firms such as Nokia, BT and Facebook decided not to turn up over fears of the virus spreading. The event had more than 10,000 visitors last year.

China revealed that 1,716 medical workers have contracted coronavirus, and six of them have died. Total cases of the virus have, at the time of writing, reached 60,000.