Credit Suisse has had to force out its five-year serving CEO Tidjane Thiam following a spying scandal which shook the Swiss investment banking world.

Thiam, will be succeeded by Thomas Gottstein, who is head of the Swiss business at Credit Suisse. Chairman Urs Rohner, who has been locked in a high-stakes power struggle with Thiam, said there was no option but to “make a change at [the] top of the house”, after it emerged last year that the Swiss bank was spying on its top executives. 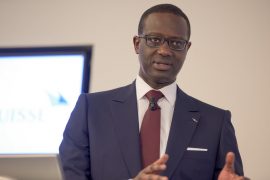 The bank’s chief of operations Iqbal Khan resigned in October, after the bank hired private detectives to spy on Khan and his wife in Zurich when it appeared he was helping rival UBS recruit Credit Suisse’s bankers. Khan is now working as co-president of global wealth management at UBS.

But it was the second case of spying which seems to have pushed Thiam, who has denied knowledge of the espionage, out of the fold. In December, it surfaced that Credit Suisse had also spied on its former head of human resources Peter Goerke.

“The second case changed [things] completely because obviously this was not an isolated case any more,” Rohner tells the Financial Times.

Read more: The digital drive to replace the passport in financial services

The decision to force Thiam out seems to have come down from pressure exerted by UK and US investors who were lobbying for Rohner’s resignation instead. The choice to lose Thiam over Rohner means the bank is running the risk of unnerving some of its international investors who backed him.

However, some shareholders had threatened to take legal action against the company if it ousted the CEO. “We are surprised about the decision,” says Vincent Kaufmann, chief executive of the Swiss investment adviser Ethos, which votes on behalf of clients owning about 3% of the bank’s shares and advises Swiss institutional investors on corporate governance.

He adds: “If Thiam had nothing to do with all this, as he claimed, then we don’t understand the decision. There is no justification provided by the bank to explain the resignation of Thiam.”  Kaufmann tells the FT. Ethos held Rohner responsible, and would continue to press for him to step down as chairman at the bank’s upcoming April annual meeting.

Thiam’s exit is also a big loss for diversity in the banking industry. There are next to no first-generation black African role models at the top of global businesses like Credit Suisse, which is the seventh largest investment bank in the world.

A spokesperson for FINMA – the Swiss banking regulator – told CNBC that it “is continuing its investigations concerning observation activities in order to clarify matters relevant to supervision (namely corporate governance issues).”

Rohner has the “full support” of the board “during this turbulent time” according to its lead independent director Severin Schwan. The board voted unanimously to re-consolidate its support for Rohner to continue his term as chairman until April 2021.

During his tenure, Thiam, who has never worked for a bank, returned Credit Suisse back to profitability in 2018 after navigating three difficult years of losses.

On the spying scandal, Thiam said in a statement: “I had no knowledge of the observation of two former colleagues. It undoubtedly disturbed Credit Suisse and caused anxiety and hurt. I regret that this happened and it should never have taken place.”