Turkey’s Halkbank could pay $1bn in fines for court absence

Halkbank, Turkey’s state-owned bank, could be in the running to pay more than $1 billion dollars in fines if it keeps failing to turn up to court following criminal charges for helping Iran evade US economic sanctions, Reuters reports.

The fines could be payable as early as March if the bank repeatedly refuses to appear in Manhattan federal court, facing charges of fraud and money laundering for using money services and front companies in Iran, Turkey and the United Arab Emirates to “undermine sanctions”. 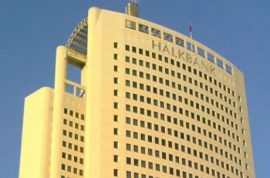 One allegation says the bank transferred $20 billion in restricted Iranian funds. Prosecutors now say the bank should be fined $1 million a day for its failure to turn up and face the charges as a form of contempt of court.

This amount would then double each week, coming to $21 million after two weeks and an exponential $1.8 billion at the end of eight weeks.

Prosecutors reasoned that the penalty “is an appropriate and necessary sanction to apply a sufficient coercive pressure to cause the defendant to cease its contempt and appear in this matter”.

Bloomberg calculates that a few more weeks of non-compliance by Halkbank and it would be paying the equivalent of the central bank’s net reserves. By mid-May, it estimates the fines would be an entire year’s worth of Turkey’s economic output.

But as far as investors are concerned, none of these fines will actually be levied against the state-owned bank.

“The market doesn’t believe at all that this is going ahead,” head of emerging-market research at TD Securities Cristian Maggio tells Bloomberg. “If it did, the [Turkish] lira would have performed very differently. Or perhaps the market assumes that Halkbank complies straight away?”

The lira has barely fluctuated and Halkbank’s shares have seen a ten-month high, suggesting the market has assumed the bank will comply straight away.

“Quite frankly, a fine that grows that large is disproportionate in every possible sense,” says Maggio. “Not even post-WWI Germany was imposed such high reparation costs.”

According to Bloomberg’s calculations, which exclude weekends, the potential fine would reach $10 billion by 3 April, and $1 trillion by the end of May.