Wells Fargo’s former CEO John Stumpf was slapped with a $17.5 million fine and a lifetime ban from working in the banking industry by US regulators, following the bank’s fake account scandal in 2016 and other sales practice misconduct.

Seven other former Wells Fargo executives were reprimanded by the Office of the Comptroller of the Currency (OCC), tallying fines with Stumpf which collectively come to at least $59 million. 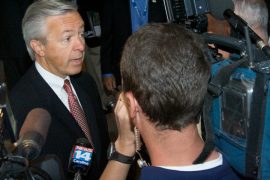 Stumpf agreed to his settlement alongside two other executives, having led the bank back when employees opened 3.5 million fake accounts to meet sales targets for its consumer-facing community bank. This, paired with a combination of retail banking issues, resulted in a big fallout with US regulators.

Total penalties relating to the fake accounts scandal and more generally the “the bank’s systemic sales practices misconduct” amount to nearly $1.4 billion, according to Forbes.

Former head of Wells Fargo’s community bank for a decade, Carrie Tolstedt, is yet to agree to her settlement but faces an even larger penalty than Stumpf of $25 million which regulators say could get even higher.

The OCC is penalising the eight executives for the time from 2002 until October 2016, in which they “failed to adequately perform their duties and responsibilities”.

Read more: FCA admits it does not track frequency of funds that block investor withdrawals

“The actions announced by the OCC today reinforce the agency’s expectations that management and employees of national banks and federal savings associations provide fair access to financial services, treat customers fairly, and comply with applicable laws and regulations,” Comptroller of the Currency, Joseph Otting said.

According to CNBC, current Wells Fargo CEO Charlie Scharf told employees on Thursday that the OCC’s penalties are “consistent with my belief that we should hold ourselves and individuals accountable”.

“They also are consistent with our belief that significant parts of the operating model of our community bank were flawed […] this was inexcusable,” Scharf added. “Our customers and you all deserved more from the leadership of this company.”

Wells Fargo, the country’s fourth largest bank, confirmed that it “will not make any remaining compensation payments that may be owed to these individuals” while it reviews the filings.