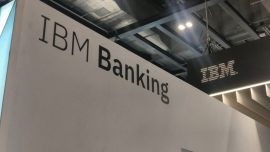 Since as early as the 1990s, Westpac’s transactional system has largely sat on IBM’s infrastructure stack

But since as early as the 1990s, Westpac’s transactional system has largely sat on IBM’s infrastructure stack.

The fact the Australian bank has chosen Promontory, a risk management firm owned by one of its biggest technology suppliers, to conduct its independent review will introduce the issue of commercial interest between the companies..

The extent of the banks potential failures are significant. Westpac admitted its failure to ping the Australian Transaction Reports and Analysis Centre (AUSTRAC) with legally-required international transfer notifications (IFTIs).

The bank says middleware between batch systems and monitoring software failed to work for a group of overseas correspondent institutions.

The government is not taking the mistake lightly. Australian home affairs minister Peter Dutton told the country’s parliament: “It is clear … that the Westpac Banking bosses, through their negligence, have given a free pass to paedophiles and there is a price to pay for that, and that price will be paid”.

The Australian Securities and Investments commission (Asic) and the Australian Prudential Regulatory Authority (Apra) have also both opened independent investigations into the bank.

Read next: Westpac moves all core banking to cloud as it plans total transfer