Why BNY Mellon thinks fintechs are friends not foes

As the world’s largest custodian bank and asset servicing company, and one of the oldest banking corporations in the US through its predecessor, many would believe that the Bank of New York Mellon Corporation (BNY Mellon) is a traditional financial services company that has not kept up-to-date with digital and technology advancements and is instead tied to its legacy past. 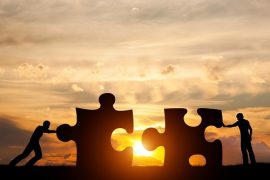 BNY is working with Vestwell, Symphony, Fnality and AcadiaSoft

But Roman Regelman, senior executive vice president and head of digital, will tell you differently. After all, he was appointed to lead the strategic planning and execution for the firm’s digital future, and as he is a member of the company’s executive committee, which is BNY Mellon’s senior-most governing body, it shows that the company is taking this shift seriously.

BNY Mellon is not alone in striving to become more digital, and part of the reason financial services companies are doing so is because of clients’ demands and expectations, which have been altered drastically as a result of the rise in innovative fintech start-ups. But Regelman says he sees fintechs as friends rather than foes.
“I don’t fear fintechs, the same way I don’t fear our competitors, but I do fear a fintech working as a competitor that is evolved. That’s why we have a real focus on this and a broad network of VCs, private equities and fintechs,” he says.

The company actually works with 150 fintechs. Regelman believes that these partnerships are established because BNY Mellon would be looking to build the same types of services and functionality, but often finds it easier, faster and cheaper to work with fintechs than develop the services themselves.

“In the majority of cases, it’s just a partnership but in some cases, for strategic reasons, we will make an investment. This will only be if it makes financial sense and if we have a strategic thesis to start with,” he states.

Regelman gives four examples of the types of fintechs he is working with.

The first is Vestwell, a company that provides a digital retirement platform that aims to transform the way plans are offered and administered. BNY Mellon partners with the company to provide workplace retirement programmes such as 401 (k), 403 (b) and auto-IRAs to BNY Mellon clients through Vestwell’s turnkey digital interface.

Symphony is another fintech BNY is working with.

“It’s a communication and workflow platform which is becoming the industry standard; it’s efficient and secure which is important in financial services,” says Regelman.

“We’re using the platform to work with many of our financial services partners – we develop chatbots on top of the platform, and there are cases where our chatbot talks to another company’s chatbot,” he adds.

For example, BNY Mellon and Deutsche Bank deployed a chatbot-to-chatbot service to replace manual responses to status updates on their security trades.

The third company that Regelman mentions is Fnality. This is actually a company formed by a dozen of the world’s biggest banks including UBS, Credit Suisse, Banco Santander, Barclays and the Canadian Imperial Bank of Commerce. Together, the banks are aiming to create a utility settlement coin (USC).

“This blockchain based project allows us to create a digital equivalent of regular currencies. The idea is to create faster, more efficient transactions, with real-time payments in the same currency,” Regelman says.

AcadiaSoft, a provider of risk management services is another fintech the bank is working with.

“We’re using their technology to improve our monthly margin calculations as part of our collateral service offering,” he states.

While Regelman explains that each of the four fintechs he mentioned are all different, he says they all form part of the same goal.

All fintech partnerships form part of the same goal.

“Ultimately, it’s about things we do for our clients daily, and working with fintechs or in a consortium enables us to get to the market sooner, in a more efficient way and secure more participation,” he states.

So how does BNY Mellon approach fintechs?

“Sometimes we’re in the market for a solution and we might look at some of the interesting companies and reach out to them directly or through the investors. Our first meeting is usually exploratory, finding out about the product and how it works, and then we’ll decide whether to partner or invest in the company,” says Regelman.

But he emphasises that fintechs are only considered as part of an overall initiative.

“Of course if someone comes in with a great idea, and it’s something we haven’t done we’d consider it but this would still be as part of an initiative – but some clients say they have a wonderful partnership with a start-up with cool technology, but the start-up isn’t even in their space, it sounds obvious but it happens all of the time,” he says.

This is why Regelman believes BNY Mellon has not had any huge issues with any of the fintechs it has been working with – although he admits not every partnership has been a success.

“We work alongside these teams to ensure what is created is not just innovative and interesting but directly applicable for the market,” he says.

As well as working with fintechs, BNY Mellon encourages its staff to create new initiatives or digitise existing processes. In addition, it has innovation centres in London, New York and Singapore. This is where the company works with technologies such as machine learning on what Regelman calls ‘cutting edge solutions’.